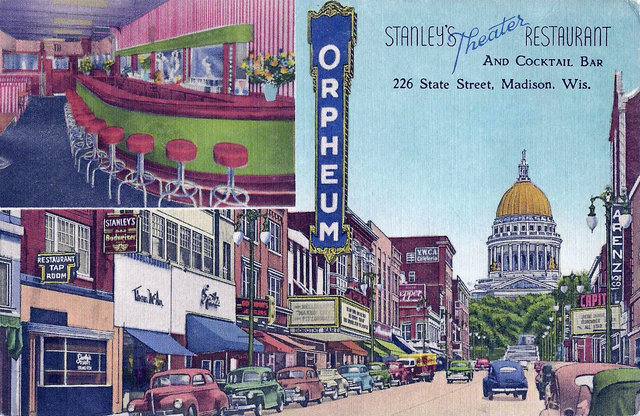 The Orpheum Theatre was opened on March 31, 1927. It was equipped with a Kimball 3 manual 9 ranks organ. The Orpheum Theatre accomplished a feat that eluded nearly every other Orpheum Theatre across the country – until 2012 it was still a glorious first run movie theatre. There is also an additional smaller theatre that was used for live concerts and art house films.

The Orpheum Theatre hosted concerts and wedding receptions and by 2021 was a concert venue.

The theater, which had been closed recently, will be reopening son under the management of Frank Productions which hopes to purchase the theater when a bankruptcy sale is held: View article

Yes, so happy to see this theatre will be re-opening! I was rather worried about its future.

The vintage Orpheum Theater, with its once-regal presence on State Street, is getting a facelift from the inside out. New co-owner Gus Paras is sprucing up the long-neglected auditorium. Interior artwork and stenciling are being restored with painstaking care. New front doors, resembling those that first swung open in 1927, are coming soon.

So are veiny black granite panels, meant to replace the blond brick that was put on the theater’s facade when it was “remuddled” in the 1960s.

“Remuddled” is the term of architect Arlan Kay, who has restored many a historic building and is overseeing changes to the Orpheum. Those changes are meant to undo alterations made to the movie palace half a century ago in the name of modernization.

The sign we see outside the Orpheum today is from that mid-century period. But oh, you should have seen what she looked like in her glory days.

Lights raced up and down the original sign, crowned with an Art Deco flair. The theater, designed by Chicago architects Rapp and Rapp, had cost a whopping $750,000 to build.

Now scarred with rust, the current sign stays in place because hanging a replacement over the sidewalk would violate city ordinances. City leaders are working on a solution.

It will take time — and many dollars — but one day the sparkling name Orpheum, like the theater itself, could again be a glamorous Downtown star.

The ORPHEUM’s owners since 2013 Gus and Mary Paras plan to do a $200,000 historic replication of its original six-story 63-foot 1926 vertical sign designed by Rapp and Rapp. The current steel face will be replaced with an aluminum replica using energy-efficient point lights in the original configuration. It’s still uncertain whether there will be chasers. In the 1930s the word “NEW” was removed from the top, and then it was “dumbed down” to what’s seen today.

The Paras family has already done restoration on the facade, marquee, ticket booth, roof, plaster, downstairs lavatories, dressing rooms, and HVAC. He said the community excitement was encouraging. Paras got a city facade restoration matching grant of up to $20,000 last year.

The new sign was installed today. Made of aluminum, the 40,000 pound vertical was fabricated locally. The lights will be illuminated on July 21. Story here: http://host.madison.com/wsj/news/local/orpheum-theater-sign-to-shine-over-state-street-once-again/article_004eff87-5d67-5281-9459-5ea90a169b3f.html

(Dec. 7, 1968) – Accept Theater Pipe Organ for UW’s Parkside Campus –The University of Wisconsin-Parkside acquired a large and rare theater pipe organ Friday when the university board of regents accepted a gift valued at nearly $30,000 from the RKO-Stanley Warner Theaters of New York City. The instrument, a Barton Theater Pipe Organ, is valued at $26,500. A Barton Console lift and platform for the organ, valued at $3,000, is included in the gift. The organ is at the Capitol Theater in Madison, where it will remain until an auditorium for housing the huge instrument becomes available in the new building now under construction. Instrumental in obtaining the gift was Fred Hermes of Racine, chairman of the Dairyland Chapter of the American Association of Theater Organ Enthusiasts, a Parkside spokesman said. (Kenosha News)

Gus Paras owned and ran Kosta’s Greek restaurant on State Street in the ‘80’s and 90’s. Nice he’s been so committed to the Madison CBD.

Still open, but not showing movies. Same story as the Majestic Theater– both are now owned by Frank Productions, and both had their seats removed and re now concert venues