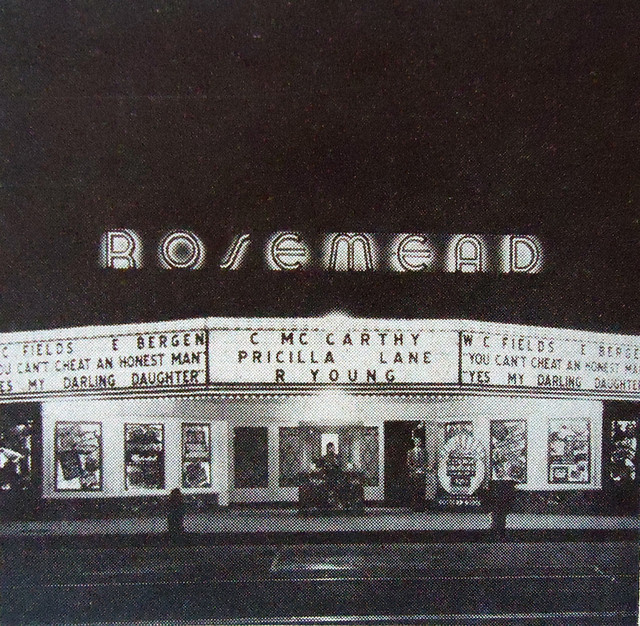 Opened in a remodel of a pre-existing building in 1938. It was part of the Edwards Theatres chain. The Rosemead Theatre was closed in around 1953, and converted into a market.

Have to comment on the AMC Rosemead 4-plex. You’re right. Nothing special. But as an impressionable kid, I went over and over again to see “The Poseidon Adventure” here (they ran it seemingly forever).This movie kindled in me a lifelong love of the movies, and I now work in the industry. I can attribute this interest directly to all those afternoons spent watching that model ship roll over again and again. Sometimes big things happen in the most unlikely of places!

I have come across more information about this theater. Southwest Builder and Contractor, issue of 8/19/1938, says that Edward Goral had received the contract from the Edwards Company to remodel an existing building at 1629 E. Valley Boulevard, Rosemead, to accommodate a movie theater designed by S.Charles Lee.

That the theater was built in a pre-existing building makes it more likely that the structure itself still exists, and was merely returned to retail use after the theater closed sometime in the early 1950s. The address would be different now, due to the change in the numbering system used in Rosemead.

Charles Goral was the same contractor who added the Annex to Edwards' Alhambra Theatre (later Alhambra Twin) in 1940.

There definitely was a Edwards Rosemead Theater on Valley! It was located approximately one block from the intersection of Valley and Rosemead Blvd. Heading toward El Monte, on Valley, it would have been on the same side of the street as Pap Oden’s Union 76 Station and Al’s barber shop. In approximately 1953 it became Jax Market.

The first time we shopped at Jax Market the shopping cart started to roll toward the back of the store. I asked my mother why the floor sloped and she replied that the building was originally the Rosemead Theater and they didn’t change the building much. If you looked at the covered entrance you could see reminants of the original marquee.

I have no idea why Edwards put a theater in sparsely populated Rosemead or how long the theater was in operation. Maybe Edwards was expecting a building boom or expansion of Fletcher Aircraft.

I am glad that I found this site, but saddened by the loss of some of the fantastic theaters of my youth. I have not been to Rosemead since the late 70’s and by all accounts there have been quite a few changes.

Tom Davidson is correct. The Rosemead Theatre was located a few hundred feet east of Rosemead Blvd., on the north side of Valley Blvd. I viewed many movies on its screen during the mid-1940s. Television in the late 1940s killed its business, as it did that of many small town theatres, but it was a lingering death. The Rosemead theatre building was turned into a Jax Market.

Fletcher Aviation business park didn’t affect the theatre’s business during my time as that large land area was the Rosemead Airport. The Rosemead airport catered to small aircraft as did Alhambra snd El Monte airports.

Here is a page from a 1944 map book, Los Angeles county. On the bottom left, you can see that Valley Boulevard is 1600 near Rosemead. Joe’s 1964 map corresponds with this.
http://tinyurl.com/5pltmq

I worked at the Rosemead 4 Theatre from June 1974 till Easter 1975. I let on I was a year older (16 instead of 15) yet in 1975 the union wanted verification of everyone who worked there. Opps! The box office got robbed the night I was meant to work a double shift yet I had gone on a date to see David Bowie’s Diamond Dogs concert at the Universal Amphitheatre. The manager’s face got a knife slice due to his delay in trying to open the safe. I used to eat free popcorn in a paper bag and drink Dr. Pepper in my own cup during breaks while rewatching ‘Gone With The Wind’. Great memories.

they torn down the levitt’s store and replaced with a ufc gym.

The three most recent comments on this page are actually about AMC’s Rosemead 4 Cinemas, not the much earlier Rosemead Theatre, which closed almost twenty years before the AMC was opened.

I’ve lived in the area since 1977 so I do not remember the original Rosemead Theater. Based on what I have seen and read, it used to stand where the Carl’s Jr now stands across the street from the new Fresh n Easy. I do remember the Rosemead 4 Cinema that used to be in Rosemead Square right next to the 10 fwy. It is now used as the Halloween store every October. Back in the 80’s I used to go to the Thrifty’s next door and buy 15 cent ice cream cones. There was also a Winchells donut shop and a record store nearby.