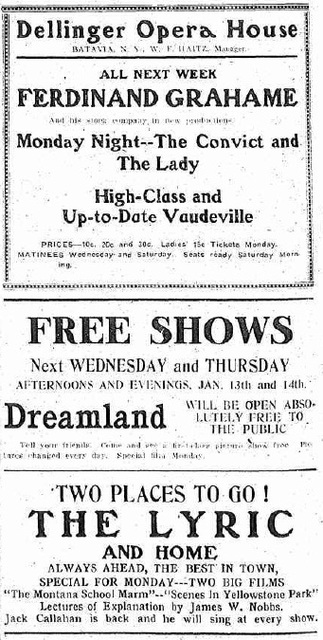 The Opera House was built in 1874 by John Dellinger. It is listed in the American Motion Picture Directory 1914-1915 edition and the Dellinger Theater is also at the same address.

Under Batavia NY in the 1897-98 edition of the Julius Cahn Official Theatrical Guide there is a Dillinger Opera House. Is it this theater? Unfortunately, there are no street addresses in the Cahn guide. The theater had 925 seats, was run by E.J. Dillinger, had both gas and electric illumination and charged admission prices of 25 cents to 75 cents. The proscenium opening was 35 feet wide X 20 feet high, and the stage was 38 feet deep. The auditorium was on the second floor.

A Wurlitzer theatre organ opus 1428 style'B' was installed in the Dellinger Theatre on 8/23/1926.
Status: Junked

Boxoffice of July 11, 1936, said that Dipson Theatres had bought the property of the Dellinger Theatre, which had been destroyed by fire the previous year. However, a later issue of Boxoffice called the theater the Dillinger, so we still don’t have a confirmation of either spelling.

Dipson had no immediate plans for the property, the July 11 item said, but it was reported that they were considering building a new theater on the site. I’ve been unable to find any later Boxoffice items about this project, and it was apparently never built. A 1950 Boxoffice item ken mc cited on the Lafayette Theatre page says that, until three years before, the Lafayette and the Family had been the only theaters operating in Batavia.

It’s possible that the Dipson Batavia Theatre was eventually built on the site of the Dillinger-Dellinger, but then the Dipson has a very narrow front in between two much older buildings. I’d expect a late 19th century opera house to have a wider frontage.

The January 7, 1926, issue of The Film Daily reported that the Dellinger Theatre in Batavia had recently been sold for $75,000 by William F. Haitz. The name of the buyer was withheld.

This weblog post from The Daily News says that when the Dellinger Theatre was destroyed by a spectacular fire on October 12, 1935, it was dark, having been closed since 1927. The Theater had been built in 1874, and had operated as a movie house for a number of years during the silent era.

Additional alterations were done in 1926, but Lempert Junior’s plans for that project were rejected in favor of plans by architect Simon Fennel.