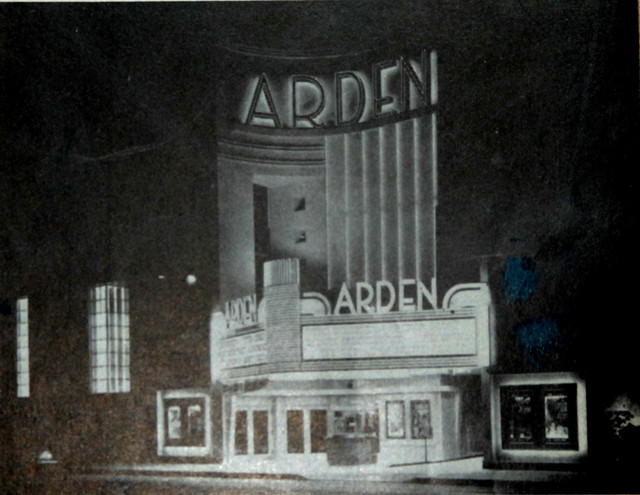 We often went to the Arden during the late 1940s and early 1950s. It was somewhat classier than some of the movie houses closer to home (South Gate). I recall seeing some chapters of the movie serials “Superman” and “Rocketman” at the Arden, and I once spilled a full box of Ice Cream Bonbons on the floor there. I last saw the Arden in 1979. It was closed, very shabby and bore a “for sale” sign just left of the entrance. The architecture was somewhat different, featuring a concave vertical facade with the word “Arden” in slim, all caps 1920s-style type. It was located more or less across the street from the former Lynwood Theater, which I believe became a bowling alley while the Arden was still drawing big crowds.

I’ve been looking for the name of this thater for over 40 years – As a Chicago boy visiting my grandparent in Lynwood, I would walk to this theater and enjoy great movies such as The Fly, Ben-Hur, and The Giant Claw. More importantly, however, it was here that at age 10 I discovered the enjoyment of talking to girls.

This photo from the LAPL shows the destruction of the Lynwood Theater in 1933, following an earthquake. I don’t know if the Lynwood was in the eponymous city or in Long Beach:
http://jpg2.lapl.org/pics48/00058879.jpg

I grew up within walking distance from the Arden and saw many many movies there, walking the aisles back and forth to the candy counter. My sister worked at the box office and let my brother and I in for free when she could. After a double feature and a cartoon it was over to Foster’s for a cold one. Here is a link to the Online Archive of California. Type “Arden” in the search box and several beautiful photos come up.

A used car lot is at this location now.

The Arden was last advertised in the LA Times in March 1974. By the way, chain should be “unknown” as opposed to independent.

I drove past this location a few days ago. Too bad I never saw this theater before the fire.

The Arden Theater was my very first job. The salary was $1.30 per hour. I had to usher and change the marquee on Tuesday nights after the last film started. Because the marquee had two sides, I normally worked until after midnight, finishing up. The manager wanted the Stars of the picture, besides just the Pictures name. Extra work. Sometimes in the rain! I was just a senior in High School.

I’ve never seen a theater where you could drive under the marquee! Nice design! Too bad it’s history now.