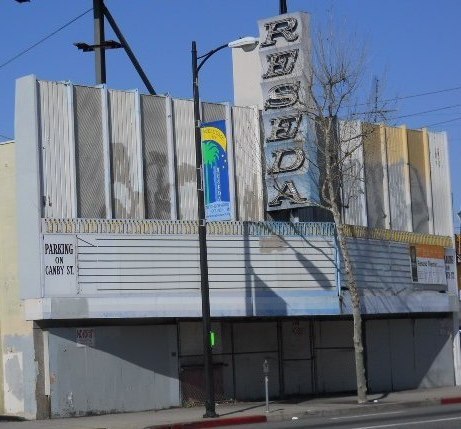 The Reseda Theatre was opened June 2, 1948 with Irene Dunn in “I Remember Mama” and Brenda Joyce in “Shaggy”. On January 25, 1981 it was renamed Cine Reseda and began screening Spanish language movies. It was closed in 1988. The marquee of the Reseda Theatre was seen in the 1997 film “Boogie Nights”.

In June 2016 plans were announced to convert the theatre into a multiscreen cinema which will be operated by Laemmle.

A March 2010 photo of the theatre has been posted in the Wikipedia article for Reseda. Click on this link: View link

and here is from a copy of the “Request for Proposals (RFP)” :
View link
“The theater may be demolished as part of a proposal.”

From the 1950s a photo postcard view of the Reseda Theatre in Reseda.

According to the latest Google Street View, the Reseda is still standing. New plywood covers the front, and the building is freshly painted.

The Reseda Theater will is set to be a Laemmle Multiplex. The sign will be restored and incorporated into the new design. http://goo.gl/dI8uPC

The Reseda Theater was designed by S. Charles Lee and opened in 1948. It had been operated by both Pacific Theatres and Metropolitan Theatres. In its final years as a Spanish language house it was advertised as the Cine Reseda. It closed in 1988 and has been sitting vacant. In June 2016 plans were announced for a new Reseda Laemmle Multiplex Theater with 6 screens and 34 senior citizen units on top of and behind the theater building. The RESEDA marquee will be part of the design.

Corrected link to the 2017 article about possible renovation