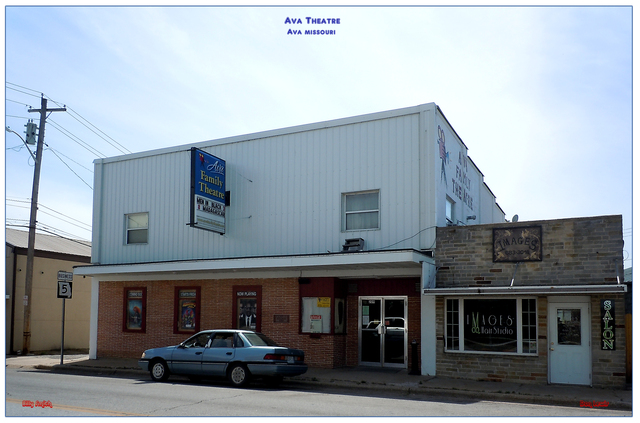 The Avalon Theatre was opened on October 26, 1955 with Robert Mitchum in “River of No Return”. The theatre was owned by H.L. Pettit who also owned the Highway 14 Drive-In and Pettit’s Drive-In. The Avalon Theatre seated 345 and was closed in 1972. It was briefly reopened in 1986.

On March 31, 1995 it reopened as the Ava Live Theatre and by 1999 it was also showing movies. It was later renamed Ava Family Theatre with 165 seats. It was closed in 2016. It was reopened in 2017 reverting back to its original Avalon Theatre name. It operates with 146 seats and 4 wheelchair spaces.

From 2012 a photo of the Ava Theatre building in Ava.

The Ava Family Theatre is all digital with Dolby 7.1 sound. Their website

This house was never called the Wilson Theatre. The Wilson was located on the east side of the town square, opened in 1925, and was renamed the Avalon Theatre in 1939, after being rebuilt following a 1938 fire. I haven’t found the year of opening for the new Avalon Theatre, but it was probably when the old house on the square closed, which was 1954.

The Avalon Theatre closed in 1972, though it was reopened for a few months in 1986. In 1995 the Pettits sold the Avalon, and it reopened on March 31 as the Ava Live Theatre. By 1999 it was apparently showing movies again, though live music was also presented sometimes. I haven’t found in which year it was renamed the Ava Family Theatre.

The new Avalon Theatre opened in 1955. The source for this and the information in the previous comment is a timeline of Ava’s history that was published in the 2009 Chamber of Commerce Community Guide (large PDF here.)

Petit’s Star Theatre launched on August 22, 1943 with “Andy Hardy’s Double Life.” It closed October 25, 1955 which was followed by the opening of the Avalon Theatre on October 26, 1955 to present widescreen film in CinemaScope. First film at the New Avalon - The River of No Return."