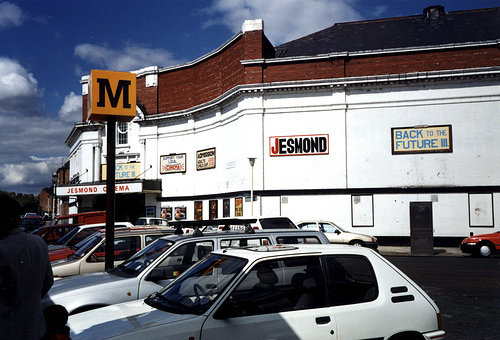 The Jesmond Picture House opened on 2nd May 1921 with “At the Mercy of Tiberius”. It was designed by the Newcastle based architectural firm, White & Stephenson, and Newcastle artist Gerald Dorman was responsible for the scenic effects in the auditorium. Seating was 998 (486 stalls, 269 pit, 243 circle). It had a 26 feet wide proscenium. The Pit seating (front stalls-cheap seats!) were on a reverse rake, upwards towards the screen. The area of West Jesmond was always a middle class area and the programming at the Jesmond Picture House generally consisted of ‘better class’ films. Saying this though, the Jesmond Picture House was one of the last cinemas in Newcastle to convert to sound films.

With arrival of CinemaScope, a new wider proscenium was built, this was the only alteration made during its lifetime. Part time bingo use came in 1974 but it went back to full time cinema use from 1978, and with a large population of students living in the area by then, average attendances were 400 to 500 each evening.

In its later years from around 1980, it was sometimes referred to as the Jesmond Cinema. The Jesmond Picture House closed on 1st October 1993 after a new Warner multiplex opened nearby. It stood empty and unused since then and the building was in poor condition. In 2008, plans were proposed to convert the building to office space, however, it was demolished in Autumn 2009. Following demolition of the cinema, a new Sainsbury’s supermarket was built on the site in 2016. The new building pays homage to the former Jesmond Cinema, both in design and name, as the new building is called ‘The Jesmond’.

Photo from 1994 of the Jesmond Picture House:–

Th ‘Jesmond’ is certainly worth saving and as far as I’m aware there’s no reason why it could not (given a bit of TLC) re-open as a traditional Cinema. It was (or so I am told) acquired by a local businessman for use as a warehouse but has remained unaltered. It is in a prime catchment area. It would be a terrible shame to let this one go to the ‘developers’!

There are some pictures of the Jesmond on this webpage; scroll down a bit to see them.

The Warner multiplex opened in December 1989 so the fact that the Jesmond lasted until October 1993 was quite a feat. This was more than can be said for that useless lot, Cannon (who acquired the ABC Circuit via underhand methods) who decided to close their city centre cinema (which still operated at a handsome profit) as soon as they became aware of Warner Bros' intention to open in Newcastle………

Vintage photo uploaded of the Jesmond showing ‘The Big Country’