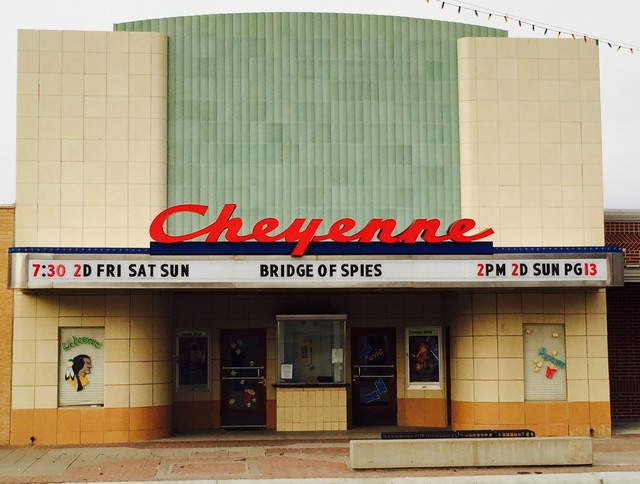 The Cheyenne Theatre opened in 1949 with 508-seats. It was closed in the mid-1980’s Since 1992 the theatre has been owned by the city and operated by the St. Francis Theatre Board.

My first visit to St. Francis, the goal to see this nicely done exterior on the Cheyenne Theatre. More pictures loaded into the Photo section.

From the Cheyenne Theater history page:

In December, 1949, seven decades ago, the Cheyenne Theater celebrated its grand opening on main street in St. Francis. The 508 seat theater was built by J.B. and Vera Roshong. Vera was the daughter of E.W. Eggleston, an Atwood theater owner who established the first theater in St. Francis in 1914. Eggleston died in 1931, and the Roshong couple managed his original theater until the Cheyenne Theater was built.

At one time, there were more than twice as many people living in Cheyenne County as there are now, and there was virtually no television when Roshong’s built the new theater. So it is easy to imagine that the movie theater was both a powerful attraction and a great business.

One movie-goer recalls that in the mid-1950s, a child could attend the movie with 35 cents: a quarter for the ticket, and popcorn and a drink for a nickel each. (Even these prices might not be the lowest ever offered—click here to read a donor’s comment about this issue.)

In 1988, the grand old building was about to be sold to be converted into a warehouse. The thought of such an ignominious end to the local landmark spurred a local group, led by Jerry Renk, to mount a fund-raising campaign to save and renovate the Cheyenne Theater to its former grandeur.

The community of St. Francis responded brilliantly: over $37,000 was donated. Large numbers of people volunteered to help with the huge task of renovating the cavernous building which was in a sad state of neglect from the many years of disuse.

(For much more, including the latest updates of this renovation success story, check out the full history page.)