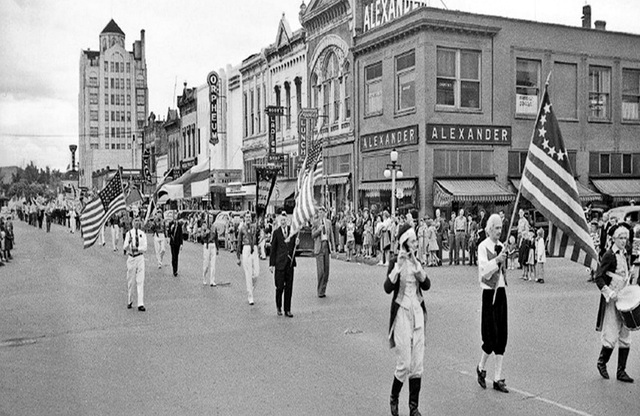 The Orpheum Theatre opened in 1889 in Baker City. It ran until 1936 when there was a fire in the building. The theatre suffered another fire in 1943. The theatre was boarded up for a time and then Ted Gamble (a Portland, Oregon movie theatre owner) leased, remodeled, modernized it and reopened the theatre in the 1940’s. The theatre was renamed the Baker Theatre.

It had a large balcony and CinemaScope screen. First run movies were shown daily until about 1955 when they went to a four day week. In 1956 the theatre was closed and sat vacant until about 1964 when it was remodeled into a hardware store. Later it became a clothing store and then a music store, who moved out of the building in 2015. In May 2016 plans were proposed to renovate and re-open the building, to be re-named Baker Orpheum Theatre. Much of the original decorative features will be revealed after being hidden for years behind false walls and ceilings.

The Baker can be seen in this 1950 photo:
http://tinyurl.com/cnwbgy

Word has it that a group in La Grande is trying to resurrect the Liberty Theater there for a community multi purpose theater facility. The Baker could be done this way too. It is pretty much intact. The projection room, balcony, under the floor is the original sloped floor and the stage is still there. At a recent Eastern Oregon Regional Theater play another longterm Baker City resident and former business owner mentioned this to me. EORT is trying to find a location for a permanent theater. This space could be restored much like the Liberty. It would be a great addition to downtown. A great space for plays, traveling music events, etc…I spent many enjoyable hours at the Baker as a child.

David Burris donated money to buy the Orpheum building to Eastern Oregon Regional Theatre in May. Renovation has started and the retail store partitions have been removed as well as the false ceiling which has opened up the auditorium. The beautiful murals are now visible. The renovation will be done in phases. The Baker marquee will be restored with the addition of the right edge bottom of the Baker letters of the Orpheum name…thus the remembrance of the 30’s Orpheum and the 40’s and 50’s Baker on the new signage. The theater will show case plays by EORT as well as local music groups and will bring in entertainers as well. It will be an extraordinary attraction for downtown Baker City!

The Baker Orpheum Theater project is moving along nicely. The group has had monthly meetings since March and the building has been deconstructed to the walls. Larry Nicholson architect from Portland completed the feasibility study and grants were submitted for further work. So far the Oregon Community Fund has given a grant along with the Oregon Community Fund. At present Eastern Oregon Regional Theater is waiting for a Leo Adler grant that was applied for. The Leo Adler grant will help pay for the next phase which will be removing the asbestos from the building and removing the false floor to reveal the slope. The plans call for a theater of about 380 seats with a larger stage, new balcony, and many other professional quality features. An acoustics professional will work on the auditorium so as to have top notch sound. The 50’s Baker marquee will return with Orpheum in the space between the reader boards and Baker in big letters above the reader boards as it was after the renovation in the late 40’s. A dinner theater benefit was held at the Geiser Grand on November 12, 2016 and was well attended! The community has embraced the project and is very excited to see it return.

Correction in the above information regarding the Baker Orpheum Theater. A grant was received from the Ford Family Foundation also.

The “Picture Theatres” section of Gus Hill’s National Theatrical Directory for 1914-1915 lists two movie houses in Baker City: The 600-seat Orpheum, a fifteen-cent house, and the 350-seat Grand, a ten-cent house. Both theater were managed by A. B. Hager. The guide also lists a 951-seat Baker Theatre, presenting music and drama, which was probably the Baker Opera House.

Oddly, the 1914-1915 edition of The American Motion Piture Directoy lists only the Grand at Baker City.

The September 17, 1917, issue of Motion Picture News had this item about the theaters in Baker City:

“THE Orpheum, Grand and Empire theatres at Baker City. Ore., have all been completely remodeled under the direction of J. P. Cotter, owner and manager. New equipment throughout has been installed, with a new pipe organ in the Orpheum. Contracts for the entire Artcraft. Paramount and Fox output have been made. The three houses have a combined seating capacity of 1,275, in a population of 8,000.”

The October 2, 1943, issue of Showmens Trade Review filed this brief report on a fire at the Orpheum:

“A spectacular fire at Orpheum Theatre block in Baker, Ore., caused a loss of $75,000. The cause was undetermined. Frank Buckmiller, owner, was insured.”

Myrtle Buckmiller’s entry into the theater business at Baker City was noted in the January 5, 1929, issue of Motion Picture News:

“Mrs. Myrtle Buckmiller has purchased the interests of the Haselton Theatres, Inc., of Baker, Ore., consisting of the Clarick, Orpheum and Empire Theatres. She will be president of the company and also assume active management of the houses.”

I notice that the marquee of the Orpheum in our vintage photo advertises the Ginger Rogers movie Roxie Hart, which was released in 1942. If there was a fire in the Orpheum in 1936, the house clearly had reopened under the same name after that. It was the 1943 fire that led to the final closure the Orpheum.

Further evidence that the Orpheum did not close down permanently after a fire in 1936 is this from the Theater History page of the Eltrym Theatre’s web site, about events following the destruction of the Clarick Theatre by fire in 1937:

“The Buckmillers were not completely out of luck, however, as they had their other theaters to keep them busy. The Orpheum Theater operated in the former location of Marilyn’s Music, between the Lone Pine Cafe and Betty’s books. The Empire was located in the building that is next to what is now the US Bank parking lot.”

Obviously, the Orpheum did not close permanently until after the 1943 fire. Wartime restrictions of civilian construction probably prevented its rebuilding and reopening as the Baker Theatre until after the war.