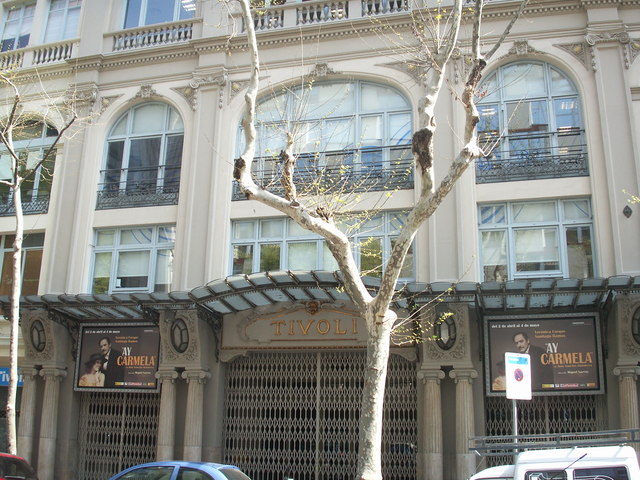 The Tivoli Theatre opened on 22nd May 1875, replacing an older theatre which had opened in 1848. Better known today as a live theatre, it screened its first film on 20th June 1913 "La vida de Ricardo Wagner" (The Life of Richard Wagner). it was reconstructed by architect Miguel Madorell i Rius in 1919 and re-opened 20th May 1919.

Seating is located in the stalls, a mezzanine, dress circle and balcony. The mezzanine, dress circle and balcony seating extends towards the procenium via seating in slips and boxes, with four boxes located beside the proscenium. The ceiling has a magnificent convexed dome which has decorative features. It continued as a live performance theatre until 3rd October 1930 when films returned with William Fox "Movietone Follies", the musical "Showboat" on 19th April 1930 and a gala presentation of "Rio Rita", Greta Garbo in "Wild Orchids", Marilyn Miller in "Sally" W.G, Pabst’s “L'Antlantida”, “King Kong”, Paul Muni in “Scarface”, Claude Rains in “The Invisble Man” and Charles Chaplin in “Modern Times” are just some of the first-run films which played here in the early years. Later Spencer Tracey in “Father of the Bride”, Audrey Hepburn in “Roman Holiday”, Kirk Douglas in “The Vikings” and Vincent Price in the 3D presentation of “House of Wax” were all big hits.

After that, the Tivoli veered from live theatre to film perfomances spasmodically, being the premiere cinema to screen the early James Bond films, but in recent years has become a live theatre again staging shows such as "Fame".

Close-up of the entrance of the Teatre Tivoli at night, photographed in October 2007:
View link