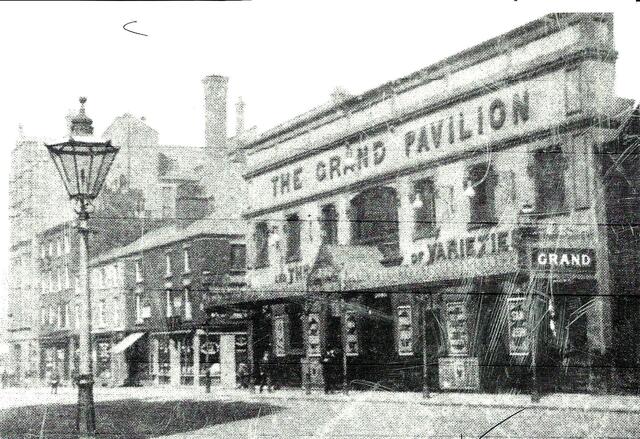 Whilst this was never a great theatre, it is one of the most fascinating buildings I have ever reported on. Not only was it believed to have been demolished, but in true jerry-building fashion, each alteration has not obliterated the previous and almost the entire history of the building is still abundantly evident, or at least it was until it was transformed into a bar a few years ago.

A fairly squat building of no particular merit externally, the facade has been radically altered on at least three occasions. The earliest photograph of it shows a plain facade with three plain windows either side of a larger central window at first floor level. This was later rebuilt in a grander style with a central Venetian tripartite window with three Georgian style sash windows either side. These are likely to have been largely superimposed onto the original facade as all windows seem to occupy the same relative space. The central window (2nd facade) had a triangular pediment above and ‘towers’ of superimposed plasterwork at each corner which may have been topped by a small dome. A shield was above each of the end windows and two urns above a closed balustrade. No name appears on the second facade, but in very large letters ‘The Grand Pavilion’ is emblazoned on the earlier frontage - despite the slightly later name of the Grand Theatre of Varieties appearing on the side at the same time. This front was later still adapted with most of the windows being removed and replaced with three far smaller sets of three windows - two sets in the lower half of each of the outer tower windows and one set in the upper part of the central Venetian window.

In all versions of the facade there was a canopy completely covering the pavement for the full width of the building - but the style was changed with the same sort of frequency as the front! In the 1960’s it was discovered that the facade was not attached to the building and was moving. It was then replaced by the present structure which incorporates parts of the second facade at ground floor level. The foyer was also rebuilt at this time and bears no resemblance to the theatre foyer. At the sides and rear are the doors & windows and remains from all stages of the history. The squatness of the building belies the internal height as the street level equates with the level of the rear of the dress circle and the steeply pitched roof conceals the stage tower and gallery. At one time there was a raised firewall interrupting the roof line (extending the proscenium wall to prevent fire spreading across the roof).

Inside the building had originally five arches, supported on cast iron pillars down each side. In between these pillars were slung cast iron fronted balconies at two levels with boxes in the arch nearest the stage. In contrast to the rest of the balcony fronts the box fronts protruded slightly into the auditorium. There was a gentle rake to the stalls and pit, and each of the balconies can only have been of two or three rows deep as there is only a depth of 3.74 metres between the balcony front and external wall. The cast iron columns are supplemented by additional column supports at all levels underneath the overhangs. At the back of the hall the balconies sweep round into a straight fronted (with rounded corners) dress circle and upper circle, again both very shallow and supported on slender ironwork

Between the arches furthest from the stage and above the upper circle was a gallery squashed up against the ceiling and with no slips. The photograph of the interior shows that the gallery was lit by a series of windows apparently corresponding with the positions of the first floor windows on the exterior photograph. The ceiling was sloped from the side to just in front of the arches, following the pitched roof. In the centre it was flattened off and decorated with rectangular and oval panels. At the sides some open timber support beams are visible. The stage lintel shows the proscenium to have been some 6 or 7 metres wide and very high (close in height to the base of the curve in the side arches). The stage was 5.9 metres deep and some 15-17 metres wide- There is no trace of an orchestra pit and I suspect that the orchestra was accommodated at the side. From this period the major survivors are the understage area (including traps but minus any machinery), the side arches, the sides of the proscenium arch; the cast iron pillars; the ceilings at the sides.

In March 1916 the theatre was converted into a cinema at first called the Palladium Cinema, the name was later changed to the Futurist Cinema. New balcony fronts were constructed about two metres in front of the previous iron ones, and this time there was some attractive Edwardian plasterwork which is the same for each level. The Proscenium was, of necessity, also reduced in size and the gallery was removed, possibly converted to the projection suite. The central part of the ceiling was reconstructed in a plain flat form. From this period almost everything in the auditorium survived until the early-21st century.

After cinema use ceased in 1924, it was sold to a church who set about the next round of alterations. Messrs Charles Clegg & Sons were appointed architects and the building contractors were J. T. Hollinworth & Co. They reduced the size of the auditorium by partitioning off the upper circle immediately behind the plaster balcony front and creating rooms and a circulatory corridor around the whole building at this level. To raise some income the foyer was let as a high class car showroom and the stage was converted to a workshop for this business - the wooden stage being removed and replaced by concrete (retaining the traps). In the 1960’s/1970’s it was discovered that the facade was moving and so it was replaced, together with the foyer. Even here it seems that parts of the structure were incorporated into the replacement as the pillars at ground floor level are certainly older than the infilled brickwork foyer is bland and of a modern vintage until a very sudden change into the original style some 3-4 metres from the front line of the building. One side has been converted into a reading room and the entrance to the stalls and pit totally changed but on the other side the stalls/pit entrance survives intact. There is now no trace of the gallery or the projection suite. It seems there was never a raised fly tower but I believe that there would have been sufficient height to fly scenery within the hall - providing that the tall proscenium arch was masked by a deep pelmet as is likely.

By 1999 the building was too large for the Seventh Day Adventists who moved across the road to new premises. The former Grand Pavilion was then converted into the Life CafÃ© and Late Room, retaining a live band space on two levels. A floor seems to have been constructed at lower balcony level with the Late Room occupying the former stalls and first balcony. It is now known as the Chicago Rock CafÃ©.

Sadly the conversion to the Life cafe, stripped out most of the decorative detail of the former cinema, in a needless (since the basic form of the building remains) attempt at modernisation. A false floor has been constructed at LOWER balcony level (correction to main text above), with the upper balcony remaining (but stripped of its Edwardian Plasterwork) The is a Studio in what used to be the stalls.

Another earlier photo of the top of the Pros arch and start of the arches at upper circle level (hidden behind the partition wall in the auditorium photos) here, showing how the building has been modernised, whilst retaining the basic structure.