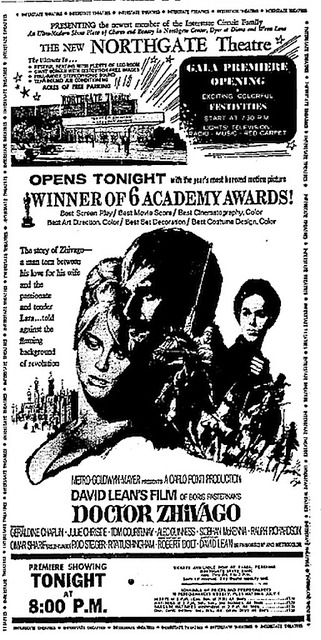 The Grand Opening ad is a great find. I was 13 years old, and we rode our bikes over to the theater when we saw the searchlight (the old carbon arc version). There were reporters interviewing people on the red carpet. It was a big deal for an otherwise boring part of town. The date had to be June 1966, though. The movie wasn’t released until December 1965.

Let’s give the Northgate its due — it was a very nice high-class first-run place when it opened. It may have looked a little spartan compared to the razzle-dazzle design of older venues, but that just refelects the architectural style of its day. It fell on hard times when its neighborhood declined and the shopping center gradually went downhill and finally closed.

The Northgate not only had a great location on the parking lot of the largest shopping center in that entire end of El Paso, but it was also close to Irvin High School and right next door to a branch library. Early on, kids were known to tell their parents they would be studying at the library after school, when they really planned to hit the Northgate in a big group. Sometimes they’d swarm the box office and then surround the ticket-taker, confusing everybody while many of them slipped in without paying.

Hey simbared “contrary” to what I suspect maybe even you can click on this link Northgate Theatre Photo and see why our description says “possibly” the end of a strip mall.

There was another Northgate Theatre in Seattle. Also located at the end of the first mall in the country they say. Art moderne/deco. Large and high end in appearance. Neon accents in the ceiling like circles and a working curtain. Waterfall if I remember. A huge lobby and a huge marquee that stretched across the front of the building. Also deco. Should have been saved. Gone many years now. Mall is more active than ever however. The very booming Seattle you know!

There was also another Northgate Theatre in Durham, North Carolina as well that is also listed on the Cinema Treasures site,but it is listed as the Northgate Twin Theatres. That theater opened on Christmas Day 1962 with Doris Day and Stephen Boyd in “Jumbo” that had a seating capacity of 750. It was twinned on June 17, 1975 and closed in 1986. I do have the opening ads for the Northgate Theatre’s grand opening in Durham from Christmas Day 1962. Contact me at

I worked at the Northgate from 1992-1995, when it was just a $1 theatre. My best memory was climbing up on the roof and watching the fires on the Franklin Mountains.

Northgate Shopping Center was announced in 1959. Nesmith and Lane were the architects of the Center which launched on May 1, 1960 and called Northgate Mall. Expansion in 1965 led to Interstate getting a prime spot for a new theater also architected by Nesmith and Lane. It also brought the Northgate Popular Department Store. Ground was broken on February 23, 1966. The $325,000 suburban theatre opened June 24, 1966 with “Doctor Zhivago”. It was on an outparcel strip making parking easy with 500 spots. It was just across the way from the Northgate - later turned NorthPark Mall.

Interstate became part of ABC Interstate and then, simply, ABC Theatres causing some slight tweaks to the theater’s official name. It was twinned in 1978 and became the Plitt Northgate Twin 1 & 2 in September of 1979 when Plitt took over ABC Theatres. In 1983, it became the Commonwealth Northgate Twin when Commonwealth Amusements . UA took on Commonwealth officially becoming the UA Northgate 2 in 1989. Boomerangs opened across the lot in the NorthPark Mall beginning as a four-plex and extending to six screens.

UA began to shed older twins and quadplexes in its portfolio in favor of 6- and 8-screen multiplexes. It had threatened to close the Northgate in 1990 at the end of a 25-year lease. A new four-screen theater, the Northeast (later NorthPark 4) opened inside the NorthPark Mall in 1990 in anticipation of the closure. However, an additional leasing period of ten years was arranged likely at exceedingly favorable terms to UA and its Northgate. A slight oddity was that - though having two theaters in a mall area was common - it was rather unusual for both to be discount houses. But citing few customers, UA closed the Northgate as a $1 discount, subrun house on September 24, 1994 with “Wagons East” and “Speed.”

But Take One Cinemas took on the lease and it was the interior Boomerangs theatre that closed in 1996. A rumored 10-screen replacement to the Boomerangs fun center and cinema was advertised but never was completed. Take One eventually closed this location on February 28, 1999 (technically as the Take One Cinema - though nobody likely new that since the Northgate signage remained until closure. It did so maintaining discount status and running summer “camps” for kids. The retail strip was later demolished followed by the entire NorthPark Mall in 2011 after being purchased by the City of El Paso.