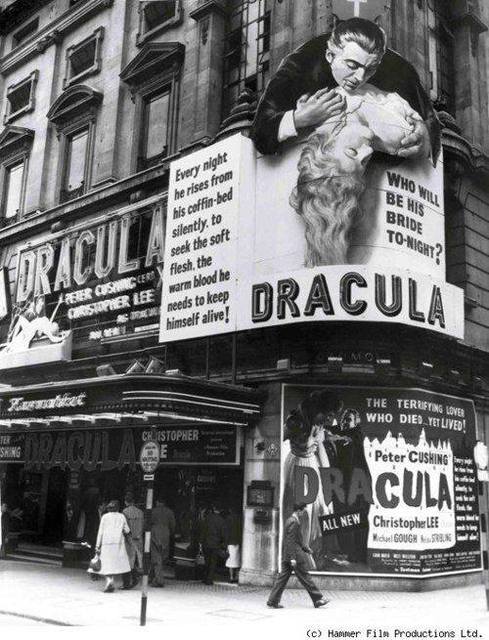 The Capitol Cinema opened on 11th February 1925 with the French film “The Miracle of the Wolves”. It was built for theatrical impresario Sir Walter Gibbons and at first was leased out to the Clavering brothers, then to General Theatres Corporation, who were taken over by Gaumont British Theatres Ltd. in May 1928.

The Capitol Cinema building took an entire block on the Haymarket, between Jermyn Street to the north and St. James’s Market to the south. The cinema’s small entrance was on the corner of Haymarket and Jermyn Street, with signage visible from the busy Coventry Street/Piccadilly Circus area. The exterior of the building had Classical style embellishments and the northern corner over the entrance had a tower feature which was topped by a giant urn.

Inside the 1,550 seat auditorium, seating was provided in stalls, circle and upper circle. Patrons had to climb up stairs (or take elevators) to reach the stalls level which was on the first floor, and up further stairs and elevators to rear the circle and upper circle levels. Due to site restrictions, the cinema was quite narrow, but tall, and was a fine example of 1920’s cinema design. Decorated in a Neo-Classical style, this was the first major work of architect Andrew Mather, and it established his reputation for his later works on the many Odeon cinemas he designed for Oscar Deutsch. The Capitol Cinema was initially equipped with a Norman & Beard 4Manual/34stops organ which was opened by George Pattman, but this was replaced in 1930 with a Compton 3Manual/9Rank theatre organ. It had a 30ft deep stage and 20 dressing rooms. There were two ballrooms and several tea rooms.

From 28th July 1929, the Capitol Cinema had the premier run of the first British ‘talkie’ film Alfred Hitchcock’s "Blackmail", which ran for several months. In March 1931 Bela Lugosi in “Dracula” had its UK premiere here.

In 1935, Gaumont British Theatres decided to completely reconstruct the Capitol, by lowering the auditorium to take in the former basement premises of the Kit Kat Restaurant. The last film to play at the Capitol Cinema was Tom Walls in "Foreign Affaires" on 18th January 1936.

The building was completely gutted and the upper floors were converted into offices. Gaumont British Theatres chief architect William Edward Trent designed the new cinema in the lower section of the building. The entrance was moved from the north corner to the centre of the building, which had originally been the entrance to the Kit Kat Restaurant. Inside the (still narrow & tall) auditorium, the seating was now 828 in the stalls and 500 in the circle levels, reduced to a total capacity of 1,328-seats by the removal of the upper circle to provide more office space above. There were now Art Deco styles, with concealed lighting in coves across the ceiling. There was a decorative panel on each side of the proscenium which had life size sculptured nude figures of a female above a male designed by Sigmund Pillitzer, which were illuminated by concealed lighting. Another of Pillitzer’s nude figures was in an alcove in the main foyer.

The cinema was again equipped with a 3 Manual 9 Ranks Compton theatre organ. The console was now on a plinth which emerged from the right-hand side wall below the nude figures.

The Gaumont opened on 4th February 1937 with a Royal premiere (attended by Queen Mary) of Richard Arlen in "The Great Barrier".

In 1941 Orson Welles “Citizen Kane” premiered at the Gaumont. In the late-1940’s the Gaumont Haymarket was usually paired to the Pavilion Cinema, Marble Arch, screening the same programme. But, although it was a popular West End cinema, it was never a great money earner and in 1957 the Rank Organisation proposed plans to replace it with a new basement luxury cinema. On 22nd May 1958 the Peter Cushing/Christopher Lee, Hammer Films version of “Dracula” aka Horror of Dracula) had its World Premiere at the Gaumont.

The Gaumont Haymarket was closed on 10th June 1959 with Robert Taylor in "The Hangman". The building was gutted once more, with a new office block built above and the basement equipped with the 600 seat, Odeon Haymarket, which opened in 1962 with a small entrance on the south corner of the building. The Odeon Haymarket has it’s own entry on Cinema Treasures; theatre #2511.

What a gorgeous exterior to this cinema, yet again its a shame what we got left with and now even that has gone!

I have just (19.06.2016) uploaded a photograph of the organ in the church where it has been since 1960. Although modified, it retains much of its original pipework and some effects.

“Many difficulties will confront the architects responsible for the rebuilding of the Capitol, Haymarket. There is an old stream under the site, for one, then the present circle will be extended to make a false roof.

It is unnecessary to the new cinema and the LCC will not allow the commercial use of a space above an auditorium."

This would suggests that there were no offices over the Gaumont. Or were there?