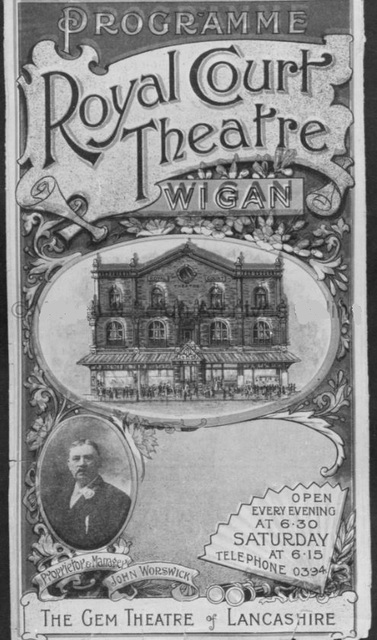 Originally designed by Richardson T. Johnson in 1886, the Royal Court Theatre was redesigned by the better known John Priestly Briggs in 1899.

In 1930 the interior was modernised to the plans of Liverpool based architectural firm Gray & Evans, and the theatre became the Court Cinema, however both balconies were retained. The proscenium was re-built to a width of 38 feet. The cinema was equipped with a Compton 2Manual/7Rank organ, with the console on a lift.

The Court Cinema was last operated by Brennan’s Cinemas and in 1962, the Compton organ was removed from the building. It was equipped to screen 70mm films and it closed on 15th August 1973 with Julie Andrews in “The Sound of Music”.

It became a bingo hall, which in turn closed towards the end of the 1990’s. The Court Cinema was designated a Grade II Listed on 10th March 1998.

The building is now in use as The Hub - a nightclub.

Photographs, dating from 1996, can be found here:–

There are some pictures on the Wigan World website that show the Court as it was in 2006. Quite a lot of old features from it’s cinema days are still in existence: View link