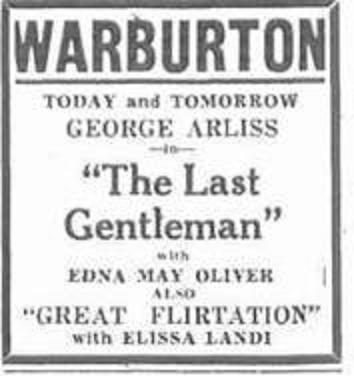 Opened in 1883 as an opera house. It became the Music Hall of Yonkers with 1,200-seats. In 1912 it became the Warburton Theater screening movies. On February 27, 1926 a 450-seat Park Theatre opened in a music store which was part of the Warburton Theatre Building. It opened with Coleen Moore in “Sally”. It was a short lived venture, closing in June 1926. The Warburton Theater operated until 1937. From 1938 to 1940 it presented vaudeville and burlesque. It remained shuttered until 1974 when it was demolished.

Here’s the opening of an article from The New York Times of August 25, 1883: “The city of Yonkers is to have a new opera house, and men are now at work on the foundation walls. It is to face on Woodworth Avenue, but will have an entrance on Warburton Avenue.” My guess would be that this was the same theater. The entrance was through an existing building, to the back of which the theater was to be connected.

Although the Times article doesn’t mention it, there are multiple sources on the Internet saying that the Yonkers Opera House (possibly its opening name) was designed by Francis Hatch Kimball and Thomas Wisedell. Best known for the long-vanished Casino Theatre, Broadway and 39th Street (1882-1930,) Kimball & Wisedell also designed the Garrick Theatre on 35th Street (1890-1932) and the Fifth Avenue Theatre, apparently the only one of the three that ever became a movie house.

The 2008 NYCLPC Landmark Designation Report for Kimball & Wisedell’s F.W. Devoe & Co. factory building has a long section about the firm (fully quoted on this Flickr page) which includes the following information: “The firmâ€™s theatrical commissions also included Haverleyâ€™s Theatre in Chicago, the remodeling of a former church into a new home for Harrigan and Hartâ€™s Theatre Comique, interior renovations to the Brooklyn Academy of Music, as well as opera houses in Yonkers, New York and Springfield, Massachusetts.” The firm’s first project had been the remodeling of the Madison Square Theatre in 1879.

This web page has considerable information about the Warburton Theatre, and two photos, dated 1890s and 1904, showing the Warburton Building and the theater’s blank-walled auditorium behind it.

The web page I linked to in my previous comment says that the Warburton Building was at 45 Warburton Avenue, and that it was demolished in the 1970s. The theater was just north of Philipse Manor Hall, a colonial era building that is still standing at the corner of Warburton and Dock Street.

Demolished in 1974, the former Warburton Music Hall was built in 1876 and turned to the Warburton Theatre in 1912 had a great run. The venue once had 1,200 seats with live performances. But motion pictures ran during a 25-year leasing agreement from silent operation into sound from 1912 to 1937.

In 1925, the venue was home to a 450-seat theatre as remodeled by new operator, Strand Theatre Circuit, which was known as The Park and the Park Theatre due to its location near Manor Park. It was housed in the former piano/music retail store space. The Park opened on February 27, 1926 with the film, “Sally” (1925) with Colleen Moore. Within two months, “Sally” (1926) with Madge Bellmay would open the Park Hill Theatre.

Superior movie locations elsewhere led to the demise of both houses. The Park was a quick exiting location closing after a June 1, 1926 screening of Richard Barthelmess in “Soul Fire” and possibly a June 2, 1926 “surprise screening.” A news article soon thereafter had a rumor that the post office, once in that spot until 1907, would come back while the city’s main post office was readied. The movies stopped in 1937 at the neighboring Warburton. Vaudeville and burlesque were tried there to no success from 1938 to 1940 under three different operators. Talks of razing the building came after the marquee was removed in 1940 and those plans included a proposed new hotel. But those proposals were halted due to World War II.