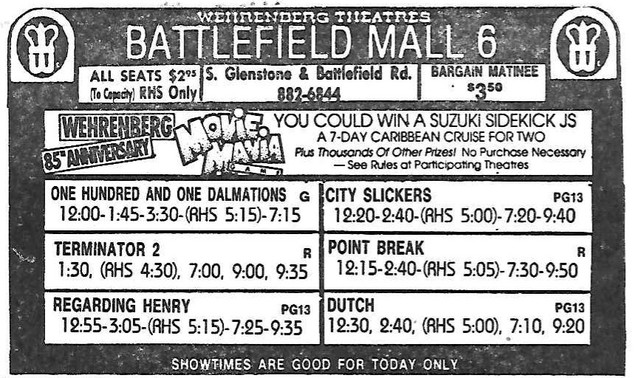 The Battlefield Mall Cinema 6 opened December 16, 1982 and was originally operated by General Cinemas Corporation. It was later purchased by Wehrenberg Theatres. There were six auditoriums with two larger auditoriums seating around 450 each. The smaller auditoriums seated from about 295 to 350.

It opened slow but picked up steam quick and became the busiest theater in town for sometime. It was opened during the "blue law" where everything else in the mall was closed on Sundays, which changed within a year. It was closed on January 7, 2001.

It was in the food court, overlooking the tables where people ate.

The theatre opened on December 17th, 1982 as a General Cinema with 48 Hrs., The Verdict, Trail Of The Pink Panther, Honkytonk Man, Six Weeks and An Officer and A Gentleman.

The theatre closed on January 7th, 2001 as a Wehrenberg theatre with Cast Away, Miss Congeniality, Dracula 2000, Unbreakable, Vertical Limit and How The Grinch Stole Christmas. It closed due to Wehrenberg’s bankruptcy.

I remember being here at least twice, seeing Stepmom and Pokemon: The First Movie.

I remember the theater very well. Growing up in Springfield, it was one of the great joys to be able to come to the mall on Sunday, not contend with traffic and see a movie.

Some things I remember: In 1995, my grandfather took me to see a movie there, I can’t remember which one now, but I recall seeing the large house stand-up for the film Clue. I commented that I wanted to see it and was told I was too young. Clue remains one of my favorite guilty pleasures ever.

I also remember seeing Best Picture 1989, Driving Miss Daisy, which was the film that launched my interest in the Academy Awards (which I continue to this day). And towards the end of its run, it was one of the few theaters in town that consistently got smaller, independent movies while the larger cineplexes were inundated with more populist fare.

When did the change in ownership from GCC to Wehrenberg take place?

Wehrenberg took over GCC theatres in Missouri in October 1989.

I remember seeing Return of the Jedi there twice in 1983 & Ghostbusters in 1984. Too bad they closed it

I worked at this theater the 1st day that it opened. Later became the assistant manager. It was fun to work there and be in the mall. I met a lot of people.

Yes, The Battlefield Mall Cinema 6 Closed On January 7, 2001 According To The Springfield News-Leader.