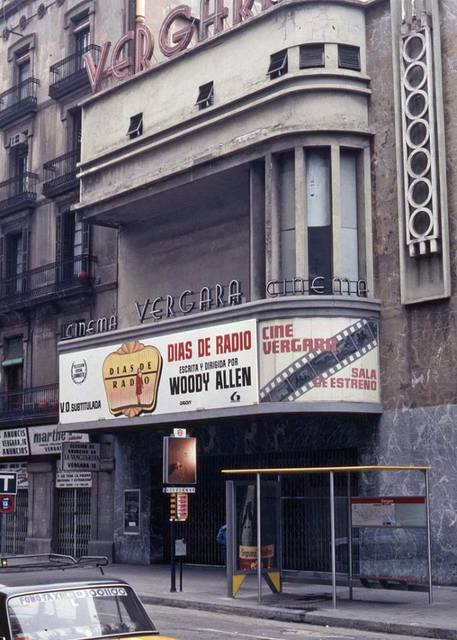 Located in a small side street at the junction of the southern end of the Placa de Catalunya in central Barcelona. The first cinema on this site was the Portfoliograf, which opened on 23rd December 1906. Any further information about the closing and history of the Portfoliograf building will be appreciated.

The next confirmed use of the site is on 8th March 1937 when the Cinem Ascaso opened. It was named after Francisco Ascaso who had died on 20th July 1936. It was a new building in a splendid Art Deco style designed by a local architect named Monguio, with interior decoration by Francesc Franquesa. The exterior had an open balcony above the entrance. Seating in the auditorium was in stalls and circle levels. There were troughs across the ceiling containing concealed lighting. The proscenium was semi-circular arched, and was illuminated by concealed lighting on its surround. The opening film was the Russion made "Los Marinos de Cronstadt" ("The Sailors of Cronstadt"). Programming tended to be a little revolutionary, which in time proved to be not very popular.

The cinema was taken over by new management and was re-named Cine Vergara from 5th February 1939 with Clark Gable in "China Seas" and Laurel & Hardy in "Way Out West". The Vergara was known for its progamming of films from Mexico in the 1940’s and 1950’s. In the late 1960’s it began screening quality American films by directors Woody Allen, Sidney Lumet, Delbert Mann, etc as well as films from Jean Renoir and British films such as "A Fish Named Wanda". The prints of the films were normally VO (Version Original) with Spanish sub-titles.

On 26th November 1993 a fire destroyed the screen and damaged the auditorium during a run of the film "Dave" starring Kevin Kline and Sigourney Weaver. I am not sure if it was repaired and re-opened, but on 9th February 1994, it was decided the cinema would close forever.

It was demolished and a shopping centre named El Triangle was built on the site.