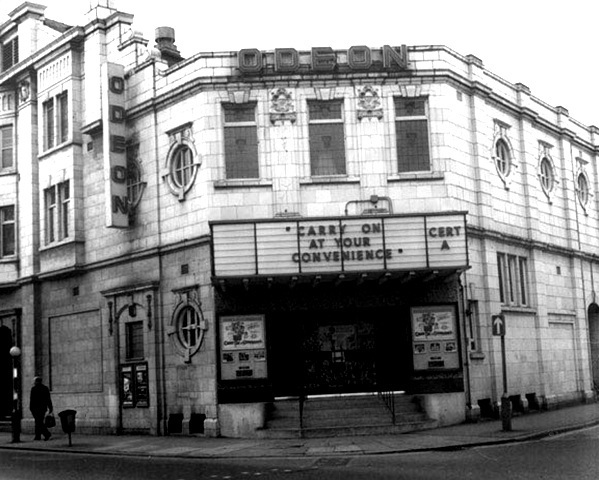 Opened 22 April 1920 with “The Forbidden City” and designed by Arnold England, the Majestic Picture House was part of the Provincial Cinematograph Theatres(PCT) circuit. With 1,233 seats in stalls and balcony and a splendid facade faced in white faience tiles on two sides of the building on its prominent town centre corner site of Old Street and Delamere Street, the cinema was a great success.

It had an oak panelled foyers which had beautiful, coloured tapestries on the walls. The interior was in a Georgian style, and it was equipped with a pipe organ. There was a dance hall and a separate tea room and cafe which were located on the upper floor. The proscenium was 35ft wide, the stage was 18ft deep and there were three dressing rooms.

It passed, with all the other PCT houses to Gaumont British Theatres in 1929 and was equipped with a Western Electric(WE) sound system. It was not until 12th July 1946 that it was renamed Gaumont. The Majestic Picture House was renovated in July 1936, with new seating installed and a re-decoration of the foyer and auditorium. A new Compton 3Manual/6Rank organ was installed that was opened by organist Con Docherty.

Later being merged into the Rank Organisation, the Gaumont was re-named Odeon on 11th November 1962. It was eventually sold to an independent operator who renamed it the Metro Cinema from 6th November 1981.

With capacity now down to 946 seats, the Metro Cinema continued as a single screen operation until the middle of 2003, sometime after a multi-plex had opened in the town. In 2008 (with seats and screen intact) the building was unused except for the long foyer area, linking the front and back elevations of the Metro, which was a Slotworld Amusement Arcade. By 2011, the entire building had been stripped out and stood empty and unused.

In late-September 2022 it was announced that the Metro Cinema would be restored back to its original condition and after that is completed it will reopen as the Metro Majestic Cinema.

A vintage photograph of the Odeon, playing the Rank release in December 1970:
View link

In the early 1980s this cinema was used for gigs. Notable bands that played were: the Boom Town Rats, The Damned, Lords of the New Church, Twisted Sister and The Exploited.