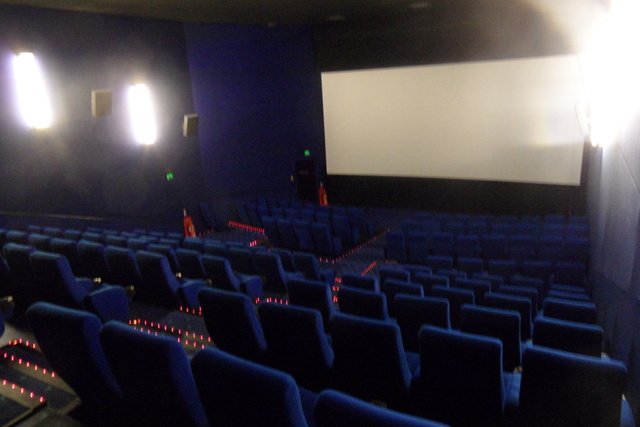 The Odyssey - in Belfast’s Titanic Quarter - was Northern Ireland’s ‘Millennium Project’. The landmark development opened in 2000 and cost £90 million. Owned by the Odyssey Trust, the Odyssey complex comprises the Odyssey Pavilion, SSE Arena and W5 interactive science and discovery centre. Cinema on this particular site can be traced back to 17th June 2001 when Warner Village Cinemas opened a 12 screen theatre here. It was the city’s largest cinema with seating for 3,040. The largest screen had 476-seats, the smallest screen 155-seats. There were three VIP screens and an exclusive Directors Lounge which offered panoramic views of the Belfast skyline and riverfront.

Before 2001 was over, an IMAX screen had also opened at the Odyssey. It only lasted until 2007. The IMAX was in a different part of the Pavilion though and it was run by a separate company (see the Cinema Treasures page for the Sheridan IMAX Belfast.

In May 2003 the Warner Village Cinemas chain was acquired by SBC International Cinemas. While most of the cinemas, from March 2004, were rebranded as Vue (a new name!), the Belfast cinema continued to trade as Warner Village Cinemas. By April 2006 it had changed hands again when Village Cinemas took over (but still retaining the Vue website). This move appears to have been a precursor for the subleasing of the cinema to Storm, a burgeoning Irish independent with 5 cinemas in the Irish Republic.

The first press advertisements for Storm Cinemas appeared on 2nd June 2006. Following a dispute between Storm and Village Roadshow (the master leaseholder) which reached Belfast’s High Court, by 4th June 2010 the cinema had reverted to Village Roadshow ownership. It was immediately rebranded as Odyssey Cinema, and a new company, Village-Theatres 3 Ltd, set up to run the cinema.

An interesting side-story to the above is the 2014 bid by Omniplex, Ireland’s largest cinema chain to take over the lease of the entire Odyssey Pavilion which had gone into administration in 2010. If their bid was successful, Omniplex made it clear they would rebrand the cinema and run it themselves. The Odyssey Trust rejected the Omniplex offer, which was reported to be too low.

The lease of the Pavilion having been acquired by Matagorda 2 in 2016, a major development then took place with two anchor tenants signed up - Hollywood Bowl taking over the Odyssey Bowl (previously operated by Movie House Cinemas since 2010) and Cineworld taking over the former Odyssey Cinemas unit. The original plan was to close each screen one-by-one, for refurbishment, while the other screens were kept operational during the year and more it would take to carry out. Then along came the Covid-19 pandemic and all Belfast cinemas were ordered to close on 17th March 2020. Even when other cinemas re-opened, Odyssey Cinema remained closed for the duration until it was rebranded Cineworld, opening its doors on 10th December 2021 as the Cineworld Belfast. The 13-screen cinema includes an IMAX Laser auditorium, a multi-sensory 4DX cinema experience, a Screen X, a 270-degree wrap-around screen. The 4DX and Screen X are firsts for Northern Ireland. The Cineworld is the first in the chain to be operated by the company in Northern Ireland.

On a visit in September 2014, by which time the cinema had been re-branded Odyssey, I attempted to clarify the ownership situation. According to the manager it has always been owned by Village Cinemas, and was only leased to Vue, then Storm. It is now operated directly by Village Cinemas. (The licence is in the name of Village-Theatres 3 Ltd). This is despite news reports in May 2006 stating that Storm Cinemas had bought the multiplex outright for €7m, but supported by news reports in February 2010 that Patrick O'Sullivan, owner of Storm Cinemas, was trying to get his lease annulled because the previous operator had failed to disclose loud music and vibrations from a nearby bar and nightclub that had led to complaints from cinemagoers! The case was decided against him, the judge remarking that Mr O'Sullivan was using this issue as a ploy to get out of his contract. So it seems clear that Storm never owned the cinema, which is now operated directly by Village Cinemas. (In April 2008 Entertainment Enterprises Group and Odeon had acquired the other Storm cinemas, all situated in Ireland.)

To elaborate on Mr. Simpson’s earlier comment, the changing lease situation, which did impact the branding and signage around the cinema, had little impact on the day-to-day operations of the cinema, which was consistent in operations and now operates essentially as an independent cinema. The music/vibrations mentioned by O'Sullivan are now less impactful, since the (Arguably dying) Odyssey complex now plays host to only one nightclub in the form of BOX. During times the club is in operation, Screen 1 (immediately above the club) Is not used. While the smallest normal screen does contain 155 seats, the VIP screens contain 40 leather recliners each. As an aside, one of the fixtures in the odyssey pavillion placed at the complex’s opening, featuring signage for everything that was open at the time, has the cinema’s original logo. It’s not overly noticeable.

Warner Village Cinemas opened at the Odyssey Pavilion, with a special preview event, on the evening of 17 June 2001. Subsequently, Vue took over (its website myvue.com replaced warnervillage.co.uk around 3 September 2004) but it doesn’t seem to have rebranded the cinema as Vue – the adverts in the press continued to use the Warner Village Cinemas name and logos. By 21 April 2006, however, a new name was in place, Village Cinemas, though still using the myvue.com address. This scenario continued until 2 June 2006 when the first press advert for Storm Cinemas appeared. The cinema had reverted to Village (Village-Theatres 3 Ltd) management by the summer of 2010 and was rebranded as Odyssey Cinemas; the first press advert appeared on 4 June 2010.

A £17m redevelopment of the Odyssey Pavilion, aimed at making it the “biggest leisure attraction” in Ireland, was announced on 17 October 2019 (sources: Belfast Telegraph and Belfast Live). The 12-screen cinema will change hands (date not yet made public), becoming the first Cineworld in Northern Ireland. The new owners intend to spend £4m on a rolling fit-out, providing “minimal disruption to visitors".

In a press release on 27 September 2021, Cineworld announced that it was now recruiting staff for its first Northern Ireland cinema. The 13-screen (one more screen than previously) is due to open in November. The cinema has remained closed since 17 March 2020, initially as a result of the pandemic, while the fit-out takes place.

Due to open as Cineworld on 10th December, with IMAX Laser, 4DX and ScreenX. The foyer will include a Lavazza Cafe Bar.

Now open. Cineworld have shared some photos on their Instagram: https://www.instagram.com/p/CXUQOdqIqOO/?utm_source=ig_web_copy_link

The IMAX screen has some abstract wall decorations.

The “abstract” sidewall features look better to me than the inelegant arrangement of red rectangular boxes on the sidewalls of Cineworld’s IMAX builds over the past few years. The “IMAX Belfast” sidewall signage really should be positioned differently, though. (Or, I might suggest, removed altogether…)

Black upholstered seating with red accents looks good, and means (in an unfilled auditorium!) less light reflecting back to the screen–important to get the most out of the IMAX with Laser projection.

This does seem to be yet another Cineworld IMAX that’s opened with a 1.43:1 screen with 1.9:1 projection capability only, albeit this time it is a refurbishment of an existent auditorium. This results in much “letterboxing” for “scope” content (~40% of the screen height.)