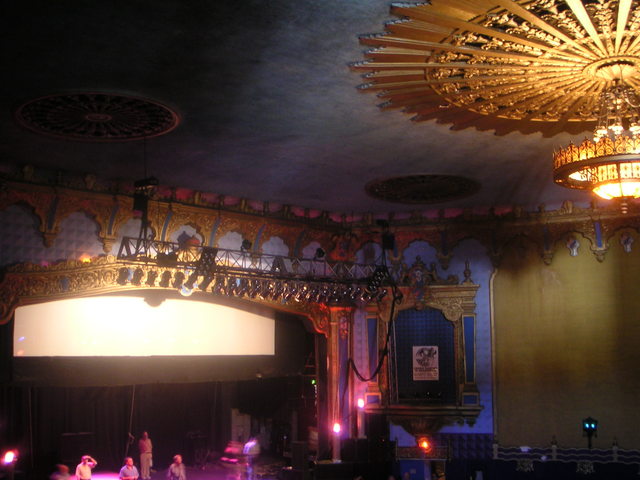 The seats on the main floor have been removed, and only the balcony seats remain in place. There is a bar in the rear of the main floor.

I noticed that photo before, Ken, and it’s not the Ventura Theatre. I think it might have been an older theater called the Mission. According to a couple of cards in the California Index, the Mission Theatre in Ventura was being operated by a woman named Jenne Dodge as late as 1939, and she had been running it for several years at that time.

My mom lived in Ventura in the late 1920s and remembers going to the movies there, but doesn’t recall the name of the theater and can’t recall much about it, other than that it was a fairly small place in an older building, with a small candy shop next door. She doesn’t even remember which street it was on. If she still had good enough eyesight I could show her the photo and she might recognize it, but she can barely see now.

I didn’t think the theater was in LA, as Life alleged. It wouldn’t make sense to tell someone to go to Ventura if they were somewhere in Los Angeles. Thanks for the information.

This is the old American Theatre, 530 E Main St. Ventura. It was located just a half block from the Ventura Theatre, which is around the corner on Chestnut street. It was a venue for the silent films in the 20’s and was owned by Chas. B Corcoran who built the Ventura Theatre at the end of that era. The building was made over into the County Stationers store and then became Bonnie’s, which burned down and was rebuilt not too long ago. Right now it is empty.

Here is a December 1975 ad from the Oxnard Press Courier:
http://tinyurl.com/dkskja

Word is that they’re going to start showing movies again, possibly as early as this summer, with digital projection.

The Ventura Film Festival shows films there every year.

DO NOT SUPPORT THIS VENUE!! Venue is beautiful but the security and staff are rude & disrespectful. I played their the other night and got yelled at and pushed on stage (even having proper credentials)! My friend who has thrown shows there gets constantly mis treated and they don’t seem to listen. You complain on facebook, they delete your complaint and block you. They tried unplugginga $200,000 Funktion One system with no warning in the middle of the DJ’s last song without consulting the soundguy. That could have severly damaged his system. DO NOT SUPPORT THIS PLACE UNLESS THEY RE-STAFF!!!