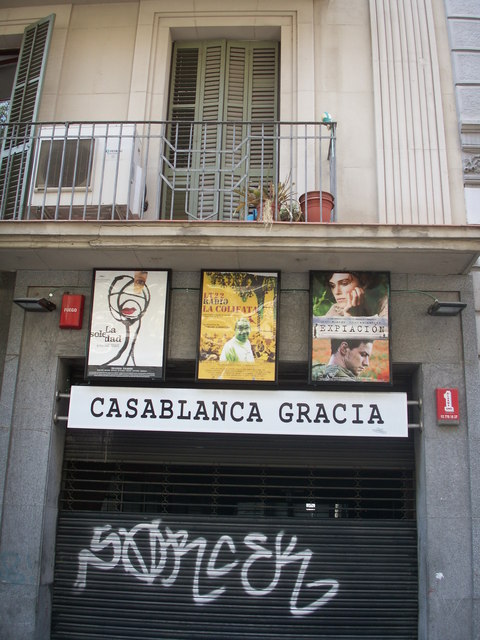 Located just north-east of Barcelona’s city centre. This opened as the Cine New-York on 8th May 1936 with a seating capacity of 800. There is a narrow street entrance, through an apartment block. The cinema was decorated in a modern Art Deco style, with concealed lighting in troughs across the ceiling, and was equipped with air conditioning.

From 14th September 1939 it was re-named Cine Espana, a more fitting name during the Spanish Civil War. Despite the name change, it continued to play American films, usually in double bills, the first being Joan Crawford and Clark Gable in "Love on the Run" and Victoria Hooper in "Lorna Doone".

Two months later, from 19th November 1939, it changed names again to the Cine Moderno. The Cine Moderno continued successfully running American made films, until it closed on 11th February 1990 with the Woody Allen film "Another Woman" starring Gena Rowlands and Mia Farrow.

New owners took over and it re-opened on 15th December 1990 as a triple screen cinema, renamed Cinemes Lauren. New decorations were carried out by interior designer Antoni Capella and the screens now seat 306, 105 and 244.

In recent years it has been re-named Cine Casablanca Gracia. A contemporary film club known as the Cine Ambigu has weekly screenings in the cinema. They show art house films from all over Europe as well as underground films which are ignored by the mainstream distribution networks. All films are shown in their original version, with Spanish sub-titles. Alcohol and smoking are permitted in the cinema. By 2018 it had been re-named Cinemes Girona.