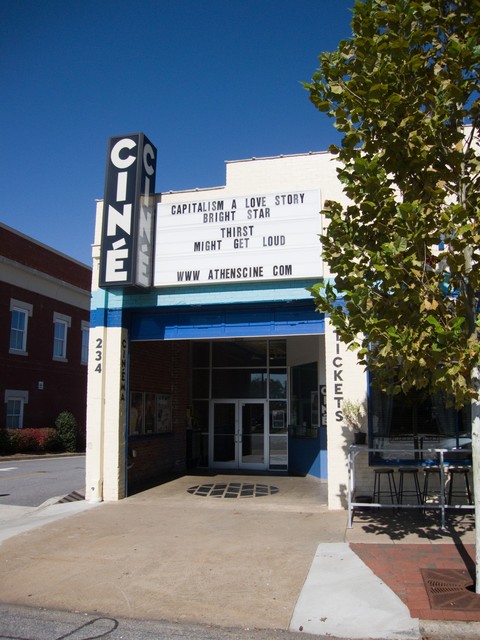 Cine is an art house theater that opened in 2007.

This is a nice indie theater (the only one in Athens right now, I think). I think it was actually built inside of an old tire factory or car repair shop from the early 20th century. I saw a couple movies there during college as class assignments. I feel like I should have gone more often.

They have GREAT projection in there, by the way. I think the theaters inside were actually designed by James Bond, a locally famous projectionist.

One odd feature of this place is that they have a bar with beer and wine and such. The last time I went to this theater was in 2007, so maybe it’s changed since then, but back then if you wanted any concessions, you had to buy them from the bartender…kinda funky.

I actually got to meet James Bond once during a class trip. He was a great guy…what a wealth of knowledge on theaters and film and projection.

The theatre still remains. It’s very small though. Only two cinemas and they usually seat a hundred people each. They just added two digital projectors last fall, so they’ll be up and going for a while.