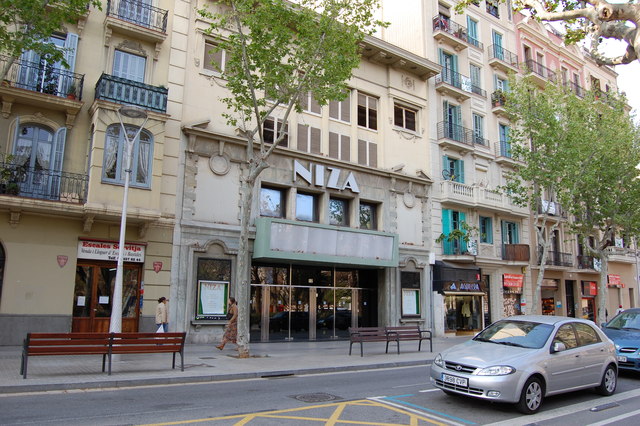 Located in the centre of the city, close to Barcelona’s most famous church, the Sagrada Familia by architect Antoni Gaudi.

The Cine Niza opened on 17th October 1946 with Bud Abbott & Lou Costello in "It Ain’t Hay" and James Cagney in "Blood on the Sun". The original seating capacity was for 1,504 and it was designed by architect Josep Maria Aixela, who also designed the Hotel President, and Miguel A. Tarrega. On 2nd October 1948 a new facility was opened within the building when the Niza Ballroom opened.

The building was taken over by the Balana group in 1980 and architect and interior designer Antoni Bonamusa was employed to renovate the cinema. New marble was added to the foyer areas and inside the auditorium, the seating capacity was reduced to 1,255. The re-opening film on 24th July 1980 was John Carpenter’s "The Fog" starring Jamie Lee Curtis.

The Balana group closed the Cine Niza in 2005 and it began use as a ballroom and for special events. It was demolished in March 2018.