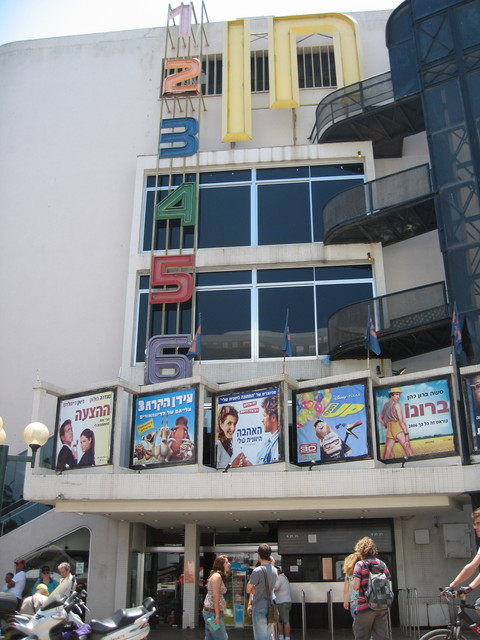 The Chen Cinema opened in the centre of Tel-Aviv in 1950 and was, at the time, one of the most lavish cinemas in town. It had a huge seating capacity divided into stalls and a circle. From the begining it showed Hollywood hits. It was designed in the German Bauhaus style which is typical to many of the buildings built in Tel Aviv at the time, and especially Dizengoff Square area, where it is located.

In 1982 it was divided to 6 screens, the biggest one (Screen No. 1) maintaining the old stalls area with 738 seats. Screens 2&3 are located in the old circle area. Screens 4,5,6 are located in other areas of the building, not a part of the old auditorium. It also changed it’s name to Rav-Chen, meaning: Multiple- Chen.

Today, although not in a shopping mall, it is still one of the busiest cinemas in Israel, still showing Hollywood hits. It is owned and managed by Israel Theaters, the company that it belonged to from the start and is part of the Rav-Chen theaters chain, to which it provided it’s name. In the last few years the same company established a new sub-chain called Planet, which has megaplexes containing 15 screens and over.

The following link shows the Chen Cinema in the early 1950’s, a short time after it opened as a huge single screen cinema. As a child in the late 60’s I saw many Disney movies over there as the parent company also had (and still has) the Israeli distribution rights for Disney. I remeber seeing there, with my parents “The Jungle Book” and “Mary Poppins”, also “Olivier!”, and later on “Grease”, “2001: A Space Odyssey” (in 70mm) and “Star Trek: The Motion Picture” which was the last film to be shown there before it was divided into 6 screens. Now, as a six screener it is still one of the best cinemas in the country, especially the very big Screen 1 which is almost identical to the old cinema minus the circle. The screen kept it’s original size, and so seeing a movie in Chen 1 is still an expirience. They also have one of the best sound systems.

Lovely cinema. Just been there once but Dizengoff is a great place to go shopping.