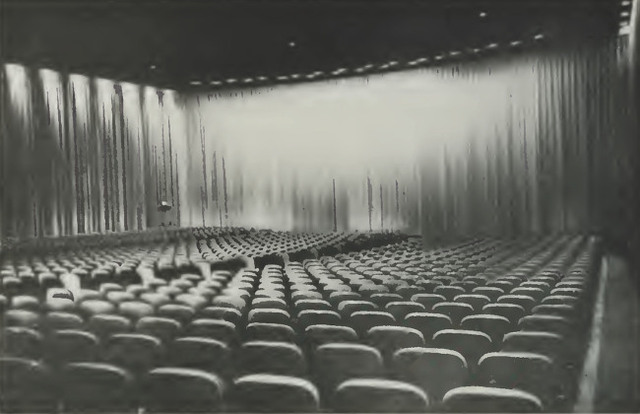 This theater opened in downtown Dallas on June 6, 1969 as the first theater built since the 1930’s. The opening attraction was the re-make of "The Great Train Robbery".

Seating was provided for 980 in orchestra & balcony levels. "Myra Breckenridge" and "Beyond the Valley of the Dolls" were the kind of fare that played here. It was the same style of theater as the Astor Plaza in New York City. I saw "Papillon" here as a young boy.

It was triplexed in 1975, and "Emmaunelle" had a long engagement. Then lots and lots of blaxploitation and kung-fu films. I would estimate it was closed around 1982 as the Cine Central. It now forms part of a hotel.

I occasionally worked as a projectionist after this theatre was tripled. But I remember seeing The Cowboys and a return run of Ryan’s Daughter both in 70MM when it was a single. It later showed Spanish-language movies for a while. In the early-to-mid ‘80’s, they gutted the theatre and turned it into a parking garage!

Boy,James that must have been something seeing the “COWBOYS” in 70mm.Had no idea that film was ever in 70mm.

Mike – this was after the heyday of 70mm motion picture PRODUCTION, but 70mm PRESENTATION was still a good marketing gimmick, if that makes sense. I believe THE SAND PEBBLES (1966) was the first such example, at least that I know of. Panavision lenses had become so darn good that a picture could actually be shot in regular anamorphic 35mm, and enlarged to 70mm for first-run exclusives with no significant loss of image quality. THE COWBOYS was one such production. I saw it at Loew’s in 70mm/6-track stereo, and again several months later at a neighborhood venue (forget which) in standard 35mm Panavision – I guarantee you, I could not tell the difference visually. Therefore, I think by the time of THE COWBOYS' release, 70mm had been relegated to a marketing ploy.

Mike – forgot to mention in the above post – I think (could be wrong) optical superiority of Panavision optics to those produced by Bausch & Lomb was a contributing factor to the demise of CinemaScope which, if I understand correctly, is an identical optical anamorphic process to Panavision but which used lenses that produced an inferior image in close-up shots due to the use of a cylindrical focusing element in the camera lens. Somehow, engineers at Panavision overcame this drawback soon after the introduction of CinemaScope, and also came up with a way to produce NON-anamorphic wide-screen images on 35mm film, all of which made the film-makers' jobs easier/cheaper and afforded them more flexibility of image size choice.

This would be where I saw The Warriors.

Also, it wasn’t demolished. It was part of the same complex as the hotel. The building is still there, but you can’t tell it was once a movie theater. It’s part of the hotel, now.

In 1967, Loews’s announced the first downtown Dallas theater built in 30 years since the Tower Theater at 1005 Elm adjoining Griffin and Pacific. The A. Warren Morey and Associates architected project in Elm Place would have 70mm Cinerama, D-150 capability, and Century projection with 6-track stereo. Decorator Joseph Schuler bathed the 980-seat theater in colorful purple, Kelly green aqua and black. Distinctive Griggs pushback purple seats with 702 downstairs and 278 in the loge balcony. A Patrick Casey mural with movie stars, a smoker loge, and attached not free parking lot were features. Construction took place in 1968 and 1969 to the invitational screening of “Those Daring Young Men in Their Jaunty Jalopies” on June 5, 1969 and public grand opening on June 6th. The director and a lot of jalopies were present for the opening. And a second theater was added to the Loews portfolio within months in Dallas when the Adelman Circuit was purchased which included Dallas’ Delman Theater.

In April of 1978, Loews dropped the Studio Triplex. At first, the screenings under independent operation were identical to the Loews offerings. However – and this is said endearingly – the Triplex devolved into one of Dallas’ most memorable grindhouses playing continuous double features of Blaxploitation, Adult and Martial Arts that allowed sneaky customers to pay one price and stay all day and night to see if they could work in five or even all six exploitation shows for their $2. The Studio Triplex closed at the end of April 1981 with Guy From Harlem/Kama Sutra; Hammerfist/Lord of the Dragon and Adios Amigos/Joshua. (BTW: If you did the films in precisely that order, you could get to all six shows for $2 by sneaking from studio 1 to 3 to 2.) Exploitation film fans and transients were delighted but the majority of film-goers were not.

After a brief period of closure, the theater reopened in 1981 and ended its life as Cine Central Three run by Herb Hartstein of Texas National Theaters. He had also run the Jefferson Drive-in during its Spanish language period. The Cine Central 3 lasted until closing in February 1985. The space was retrofitted to be incorporated into the existing hotel. Downtown would not get another movie theater until the short-lived West End Cinema in November of 1993.