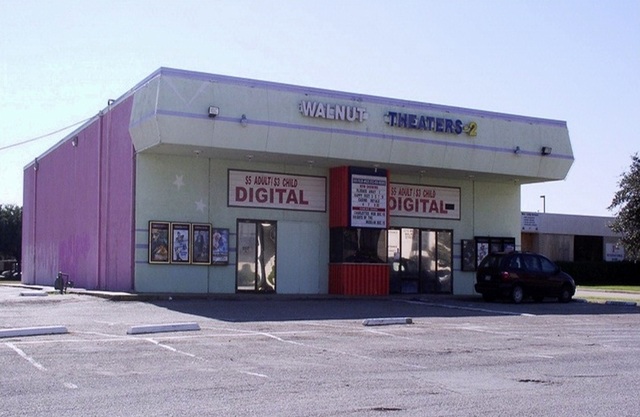 The Walnut Theatre shows to have been built in 1972. RAC Photography

The Walnut Twin’s groundbreaking ceremony was in 1973 and the theater opened on March 1, 1974. Texas Automated Theaters was behind the theater and McBroome-Bennett were the engineers of the project. The automated theater concept was where small theaters would be located adjacent to – or inside of – hotels or other high traffic areas and run with minimal personnel. They were often franchised. The Walnut was one such theater. It was designed to be a four-screen concept with two mini-theaters completed and two more mini-units added later. That expansion never happened. The theater sat behind the newly completed Colonial National Bank shielding it from view from passer-bys on Walnut Street traveling east to west. As a result, a sign was placed on Walnut St. in an attempt to attract customers. Auditorium One had 298 seats and Two had 224 seats for a total of 522 seats. That’s the way it stayed from 1972 to 2012 when the theaters were converted to allow for booked parties and other events.

Texas Automated found its operators in independents Don and Betty Christenson, their first theater. They had actress Charlotte Westmoreland of “Kristi and the Legend of Mt. Shasta” as one of the few personal appearances hosted at the theater. Under their operation, the Walnut Twin would transform from first run to discount, dollar screen in the early 1980s. The couple said that 1996 was one of their better years financially as a discount house but closed the theater on Nov. 19, 1996 due to the owners' health concerns. Because the 9/10 screen United Artists Galaxy, UA Northstar 8, and Cinemark Hollywood 15 were all within five miles of the Walnut, many thought the aged twin-screener would not reopen. That proved false.

Sanjay Chandahas bought the theater six months later in 1997 installing a state-of-the-art sound system with speakers in the ceiling and sides returning the theater to first run status. The original white quartz theater which had attracted graffiti in the down time was painted a lime sherbet green. Chandahas rebranded his business as Walnut Theatres, continuing operations into the 2010s. Under his direction, the Walnut drew crowds with “Rocky Horror Picture Show” but maintenance issues caused by unruly patrons forced the discontinuation of that booking. As noted, Chandahas redesigned the theater in 2012 to accommodate non-theatrical bookings in hopes of extending the viability of the Walnut Theatres.

This has been a second-run theater throughout most of my life. Whenever there was a school field trip to see a film, we would typically go here or the Medallion theater. I’m glad it’s still running. So very few of the pre-megaplex theaters are.

That Location Has A Happy Life In 97. I Haven’t Seen An Operated Independent Theater Operation In The Dallas-Fort Worth Area, Other Than One In Denton.