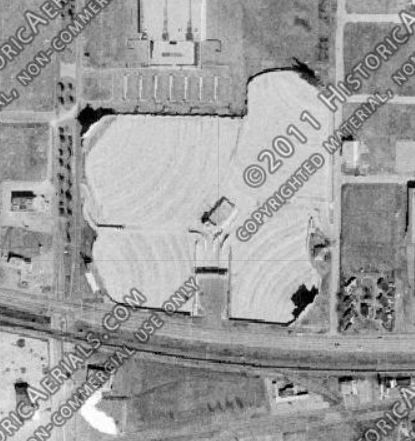 Originally on this site stood the Downs Drive-In which was opened as a single screen drive-in in 1949 with a capacity for 400 cars. It was closed and demolished in January 1970.

The Century Drive-In was opened June 13, 1970 with four screens, each having a capacity for 500 cars. It was so successful that a fifth screen was soon added.. It was closed in 1987 and was demolished.

Matt54. Sorry, I have not posted it as of today. (Sorry this is so late).. I’m trying to located it within all of my photos so I can post it on my flickr page.. Will let you know when I located it. Thanx!! Randy A Carlisle.. RAC Photography.. Historical Photographer

matt54.. A Photostatic copy of the DOWNS Drive In I have from the GPHS yearbook is now up on flickr with a History & description of the Drive In & a little description of the photo itself. The photo you’ll see is a photostatic copy of the photo that was in the Grand Prairie H.S. Yearbook. Enjoy! Randy A Carlisle..Historical Photographer
RAC Photography .. View link ..

Never mind my question, SiliconSam has already answered it, above!

The Twin Drive In also known as the Jefferson Twin had 2 screens. Originally a single screen Theatre, it was later Twinned. Time-line, not sure of tho.. It across the street from the Yello-Belly drag strip. (That is still there today)……

Historicaerials is a great site! I use it all the time when trying to located an old Drive In. Thanx for posting the aerial shots.

The Century Drive-In’s tract of land originally was home to the Downs Drive-in at 2510 W. Main St. in Grand Prairie. In 1949, the Downs became the third drive-in theater to open in the Dallas-Fort Worth area. Its original screen burned and was replaced in 1957. And not long after being sold to a new owner, it closed on January 20, 1970, was bulldozed and replaced by the newly-named Century Drive-in which opened June 13th, 1970. It closed in 1987 and was later bulldozed.

The Downs was started and operated by Tim G. Ferguson, Truman Hendrix and H.S. Ferguson. The Downs was named after the nearby Arlington Downs Racetrack which had opened in 1929 and whose racetrack and grandstand extended eastward toward the drive-in less than a mile away. Located midway between Dallas and Fort Worth and with Irving within striking distance to the North, the Downs was well positioned. The opening of a GM factory in 1951 just across the way would soon add to the traffic and visibility of the area.

Ferguson complained about the availability of first-run film titles at his theater and brought a $150,000 Sherman Antitrust-based lawsuit against the five Grand Prairie theater owners as well as the major film studios. Ferguson’s drive to have more of a voice for drive-in theaters generally led him to become a founder and president of the Texas Drive-in Theater Owners Association.

The Downs theater tower burned to the ground in a spectacular 4-alarm fire on January 19, 1957 where the film “Fury at Gun Sight Pass” was playing. Fortunately, motorists backed away and were unharmed by the $15,000 fire. The fire was attributed to the high winds combined with the screen tower’s neon lights which were excised from the redesigned screen tower. The Downs racetrack closed in 1958 but the theater retained its name.

The theater’s positioning as a family-friendly spot was enhanced by its “Candy Cane City” amusement playground. The opening of a larger park — Six Flags theme park — in 1961 provided yet more family-centric traffic near the Downs which continued to thrive in the decade. Its success led the McLendon Theater Circuit to purchase the theater with grander plans. As the multiplex era of indoor theaters was beginning and with twin and triple screen drive-ins propping up, McLendon decided to one up the other drive-ins. It would demolish the Downs not long after January 20, 1970’s double feature of “Flare Up” and “Speedway”.

McLendon would create what it called the world’s largest drive-in and first four-screener. With the Arlington Downs a distant memory as a neighboring entity, the newly named Century Drive-In would begin business on June 13, 1970 with “Beneath The Planet of the Apes” with “The Undefeated” and “Two Mules for Sister Sara” with “Topaz”. With four screens with 500 spots each at its opening, the theater did well enough to merit an additional fifth screen. The Century would go on 17 years until 1987 before being bulldozed. The nearly 40 years of drive-in exhibition for the Century/Downs makes it the area’s longest standing addresses for nearly continuous and certainly consecutive years of outdoor operation.

Opened on two of the screens with “Beneath the planet of the Apes” and “and "The undefeated”, and on the other two screens with “Two mules for Sister Sara” and “Topaz”.