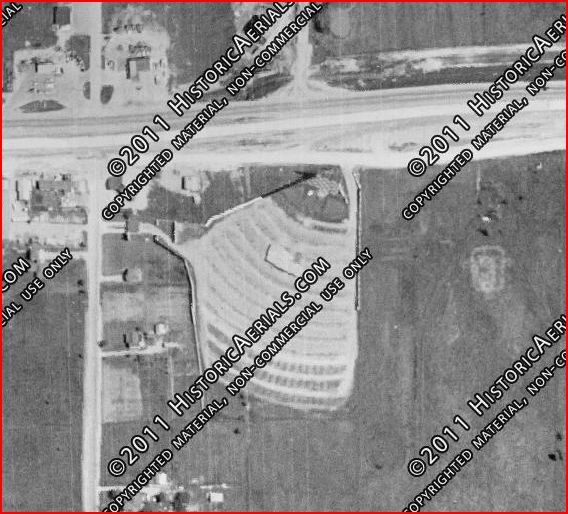 The concession stand was a substantial cinder-block structure, which had a seating area, maybe four rows of ten seats, that face the screen through a picture window.

The 183 Drive-In was operating until 1983. The location is now a freight depot for trucks.

Contributed by Michael, Al B. Wesolowsky
Get Movie Tickets & Showtimes

Theatre closed for good at the end of 1983. Final feature was “Return of the Jedi”.

Address should be changed, as current map link takes you to the cloverleaf, several blocks to the west of the Britain Road area.

Today it looks like the lot is occupied by Drive Time Used Cars & J R’s Auto Services …. Per Google-maps….

I remember as a young one sitting on the porch of my boys scout hut facing the drive-in screen in early ‘70s. This drive-in taught me about exploitation T & A flicks. The Pam Grier prison flicks. The 'Teachers" and 'Nurses" movies. Oh, how I remember those hot flicks, its weird people seeing mainstream films there. I tear up ever time I drive by the location. What memories!!

The entrance was just north of 2014 North Britain Road (VIP Finance). Drive time’s actual address is on East Freeway (where the screen was located).

My first job of any kind was in the concession stand at the 183. They were showing THE TRAIN. Worked there for a while before transferring to the Park Plaza Drive-In further west. After work at the 183 some nights, my friends and I would come back and break into the concession stand and sit around eating stale popcorn at one in the morning. Master criminals.

The venerable 183 Drive In opened in Irivng in 1950 designed by architect Raymond Smith. The 450-car drive-in theater was a rarity lasting almost 35 years just into the home video era. Irving Mayor Hans Smith co-owned the drive-in with W.P. Gandy at its opening. The owners of the Uptown Theater in Grand Prairie, Mr. and Mrs. Leroy Fischer, then bought the 183 Drive-In and the Irving Theater in November 1959. In the 1960s, Jerry A. Meagher’s Meagher Theatres Circuit took on the 183 Drive-In and the Irving Theater, created the Chateau indoor theater, Buena Vista, Park Plaza Drive –In and would take on the unique Texas Stadium Drive-In from McLendon.

The theater may be best known for its role in the 1988 documentary, “The Thin Blue Line” by Errol Morris and real-life trial of Randall Dale Adams. Adams was wrongfully convicted of murdering police office Robert W. Wood and sentenced to die by lethal injection. Adams had gone with another man, David Ray Harris who had stolen the car they were in, to the 183 Drive-In where they watched “The Student Body” and “Swinging Cheerleaders.” The investigation would lead to Harris who – in turn – would pin the murder on his 183 Drive-in partner, Adams. There was no doubting the staying power of the 183 Drive-In which closed in 1984 with almost 35 years of ozone service.

I saw a double feature there after a brief appearance at the prom in 1981, My Bloody Valentine and Friday the 13th. The Denny’s was just to the west and open all night.

We lived on N. Britain Road (320 N. Britain) in Irving from about 1951 to 1956. My mother, Mary Bell, worked in the concession stand at the 183 Drive-In during part of this time. For lack of a baby sitter, I sat many a time in our car watching movies while she worked.

I recall that the movie screen was not well positioned, as it faced to the southwest and caught full-on the afternoon sun. They could have probably started the movies 45 minutes earlier if they had only faced the screen to the northeast with the setting sun behind the screen.