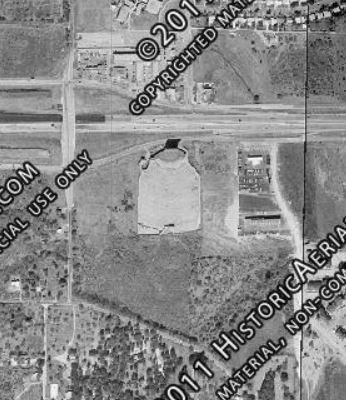 This was located on the south side of Highway 183, on the far west side of Irving, TX, just a few miles west of Belt Line Road. The screen faced south.

Opened on June 11, 1964 with Celia Milius in “Island of the Blue Dolphins” & Brian Keith in “The Raiders”. The Park Plaza Drive-In was a new drive-in, compared to the older 183 Drive-In at the intersection of Britain Road and Highway 183, several miles to the east.

Contributed by Michael, Al B. Wesolowsky
Get Movie Tickets & Showtimes

Dallas—The 650-car Park Plaza Drive-In, featuring an all-paved ramp area and a playground in the rear, was opened at mid-week by Jerry Meagher in suburban Irving.

The playground of the $250,000 showcase was placed in the rear so the youngsters could continue using it after the show begins. Fully fenced and illuminated and covered with pea gravel, the playground has an attendant on duty at all times.

Meagher said all designing and detail work were planned for the family. The ticket booth will accommodate cashiers to service two lines of cars to prevent long waits.

The ramp area contains an illuminated walk from the front ramp all the way back to the concession stand and playground, with each ramp numbered.

Reed Whatley, who has many years of experience, is the manager of the Park Plaza. He has worked at Harlingen, Houston, Temple and Roswell.

Historical Aerials shows the Park Plaza Drive-In standing as late as 1979. By the 1989 shot, it was gone. RAC Photography

went to this drivein a lot

I worked in the concession stand, boxoffice, and, as the article quoted above describes, playground attendant here in ‘65. First thing playing here when I started was HOW TO MURDER YOUR WIFE. As playground attendant, I got to see all the movie, some twice a night. I most remember CHEYENNE AUTUMN and lines of cars stretched for miles to get in for SHENANDOAH. One night, the oil refinery (or whatever it was) next door blew up during SHENANDOAH and hundreds of cars crowded and honked trying to get out of the drive in. A couple years later, a schoolmate of mine was killed in a car accident on 183, the car crashing through the front wall of the drive in and coming to rest in front of the screen during the movie. I wasn’t working there at the time, but my sister was on a date there and witnessed it. It was a fun place to work, great fun. Whenever I visit Irving now, I try to figure out where it was, but the landscape is so different now, it’s hard to recognize.

The map currently showing on this page is way off. The Park Plaza was out on 183 near Esters Road, not near MacArthur Blvd.

The Park Plaza was torn down in the early eighties to make way for a Sesame Place amusement park which only lasted a few years. A Wal-Mart sits on the site of the Park Plaza.

Launched June 11, 1964 with the films, “Island of the Blue Dolphins” and “The Raiders.” The ozoner added swap meets in the afternoon hours. Ads for the drive-in are discontinued during the 1980 season and the site was demolished in 1981. The Anheuser Busch Entertainment / Children’s Television Workshop opened a $10 million Sesame Street-themed Sesame Place Amusement Park on the site in June of 1982. It was the second such amusement park – larger than the Pennsylvania original – and part of a projected major launch of Sesame Places. Despite the Muppets best efforts, this location’s failure tapped the brakes on the ambitious roll out of Sesame Places.