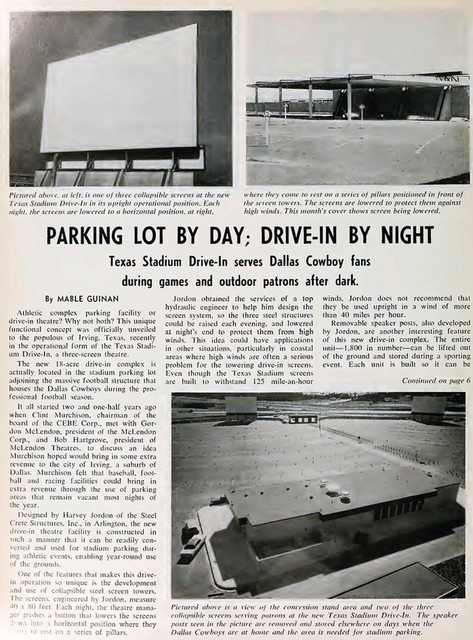 An unusual feature of this drive-in was that the 3-screens could be lowered flat when not in use to protect against high winds and the speaker poles can be lifted out of the ground to provide a parking area. It was opened on December 22, 1972. It closed in the fall of 1982.

This theatre closed after the summer season in 1982. The Texas Stadium concession/projection building was later renovated into the Dallas Cowboys Pro Shop. There were three screens, one was retained and converted into a storage area with the screen pearmently in the “down” position (the screens all had hydraulic systems and were not left “up” on game days).

Here is a 1979 aerial photo of the drive-in with all three screens up, courtesy of Historic Aerials Dot Com:

Here is a 1972 image with the screens and concession building apparently not installed yet:

The above address maps reasonably close to the stadium. The address currently being used maps about 5 miles west of the Stadium.

Change the header from 2401 W. Airport Freeway to 2401 E. Airport Freeway, and it puts you right there… The 2401 E. is the actual address of the site of the former stadium.

Would anyone here know which issue of Boxoffice Magazine the Texas Stadium Drive-In Theatre article appeared in, please? Thank you.

This is not the only drive-in in the World to have a screen that can fold down when not being used(it also happens at the Tom Price Hall and Drive-in at Tom Price, Western Australia, Australia, it gets folded down when a cyclone warning is issued).