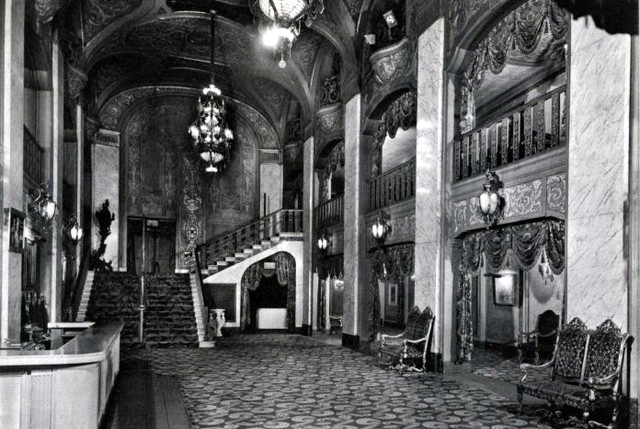 The Paramount Theatre was opened on March 1, 1928 as a movie palace & vaudeville house operated by Paramount-Publix. The opening movie was Bebe Daniels in “Feel My Pulse”. The theatre is decorated in a French Baroque style. It was equipped with a Publix 1 Wurlitzer organ which has 3 manuals and 21 ranks. The organ was restored in 2018 and is maintained by the Puget Sound Theatre Organ Society.

In November 1956 the Paramount Theatre opened as a Cinerama Theatre with “This Is Cinerama”.

The Paramount Theatre is now one of Seattle’s best venues for stage shows and concerts.

From: Signs of the Times, February 2010, a sign-making trade magazine

In 1928, the worlds first TV station opened in New York; Mickey Mouse made his big- screen debut in Steamboat Willie; and Seattleâ€™s most opulent theatre palace opened to the wide-eyed public with a landmark sign that featured 1,944 flashing bulbs and 5-ft.-tall, neon, open-pan channel letters. As part of the city skyline for more than 80 years, it has been deemed â€œthe most significant sign in Seattleâ€ by Seattleâ€™s Landmarks Preservation Board. The original theatre and sign were designed by the famed Chicago architectural firm Rapp and Rapp. Originally built and installed in 1928, the sign was changed in 1930 to reflect its new name, the Paramount Theatre.

In December 2008, David Allen, director of operations for Seattle Theatre Group (owners of the sign), decided the old sign needed replacement after having endured many years of wet Northwest weather. Rust and decay had deteriorated its sheetmetal beyond repair. Birds and rodents ate away the old electrical wiring, which created a fire hazard. Pieces of the sign had begun falling off the marquee, which threatened the safety of pedestrians on the sidewalk below.

The Sign Factory (TSF), Kirkland, WA, contracted to remove the old sign and replace it with an exact replica. TSFâ€™s field manager, Tom Bonifant, maintained the old Paramount sign for more than 15 years. Bonifant had spent more than a decade replacing its transformers, wiring, sockets and sheetmetal, so Allen entrusted him to manage the signâ€™s replacement.

Something old, something new

We began by surveying the existing sign for salvageable, original elements. We hired West Coast Structural Engineering Inc. (Mukilteo, WA) to analyze the steel and provide a structural observation and assessment report. Their analysis found the 12 x 5-in., steel I-beams and connecting, 15-in. C-channels in excellent shape, with only some surface rust in places. Not bad for projecting out the side of a building amidst often rainy environs for more than 80 years. However, the welded, 2-in., angle iron that connected the sign sections to the structure required replacement.

The board approved the sign, with the stipulation that it match the originalâ€™s design and size. TSF built a full-scale, section prototype of the sign so board members could see and touch the actual paint colors, materials, neon tubes and LED bulbs. After having acquired a certificate of approval from the Board, we obtained sign and electrical permits from the City of Seattle.

With approvals in hand, TSF began the manufacturing process. First, we made â€œdirty handprintâ€ patterns onsite by placing large sheets of paper over the signâ€™s face and rubbing the paper to create a relief image. This allowed TSF to recreate the intricate scroll patterns and distinctive design elements with exacting detail.

In addition to making patterns, we took measurements from all sections to ensure accuracy. Next, we began the painstaking process of transposing the pattern and measurement information into our CAD/CAM computer system. On our design-station computer, which operates Windows XP Pro, a 2.67MHz Intel Core Duo processor with 2 GB of RAM, Corel X3, and Gerberâ€™s Omega Composer version 3.6, we digitized the size and shape.

The signfaces measured 65 ft. tall overall and varied in width from 5 ft. 4 in. to 8 ft. 8 in., while each face was built in three separate sections for transport and installation ease. We routed the signfaces from 0.125-in. aluminum with the bulb socket holes and letter centers cut from the face. We cut grooves at a 0.031-in. depth to allow for insetting and welding of 3-in. x 0.063-in., chasing bulb channels.

On the reverse side of the signfaces, we used a Miller Millermatic 275 220V, wire-feed welder to attach a 5-in.-wide, aluminum C-channel frame. TSF built 2 x 2 x 3/16-in., steel angle, custom rolling dollies to better access each section of the sign throughout the construction process. We designed the dollies with a rotisserie feature that allowed production crews to easily reach every sign section. This allowed TSF to save time and money and reduce the risk of damage to the signs during the construction process.

We welded aluminum channels from 0.063-in. material to the face sections using the grooves previously routed into the face. The open pan channel letters, which read â€œParamount,â€ were wrapped with 0.080-in. aluminum. The letters were constructed with an 8-in. return to match the original letters.

Next, we primed the sign faces were with Akzoâ€™s Grip-Gard Washprimer, a two-part, self-etching primer. Then, 1,944 UL-listed 660W/250V Suprolux Bakelite housing bulb sockets were installed into each hole routed from the face. We inserted router-cut, rigid foam insulation, which we coated with waterbased primer, into each socket to prevent overspray contaminating the sockets.

We painted the bulb channels and open-pan channel letters gold to match the existing sign. TSF also paid careful attention to the exact color to replicate the original signâ€™s patina. We sprayed on satin-finish, Matthews acrylic polyurethane paint. We then masked the gold areas and painted the signface blue to match the old paint color.

Throughout the face construction, painting and wiring processes, we routed the 0.090-in.-thick aluminum back sections on our AXYZ CNC router. Access panels were strategically placed throughout the back of the sign to provide for service of the electrical components while avoiding the internal and external structure. Hinged covers were included on the panels to keep out the weather, birds and other critters. We welded the 0.080-in., aluminum sign returns to the back and face sections, and then primed and painted the sign back and returns to match the original color.

Every piece in place

Over two days â€" October 6 and 7 of last year â€" we removed the original sign and installation of the new sign sections occurred. We cut the old sign into five sections per side for removal. TSF estimated the sheetmetalâ€™s weight at roughly 12,000 lbs., and the new signâ€™s aluminum weighed 6,000 lbs. The Sign Factory hired Apex Steel Inc. (Redmond, WA) to remove the old sign and complete all onsite welding. City inspectors performed a very detailed and comprehensive inspection of all the field welds.

Thanks to Tom Bonifant and his crews, the installation progressed like clockwork and ahead of schedule. On October 21, a lighting ceremony was held, and the public got their first look at the bright, new sign. The response was overwhelmingly positive, and Seattle Theatre Group was thrilled with their beautiful new sign.

In addition to its aesthetic appeal, the sign will consume 90% less energy and save approximately 493,268kwh of electricity per year versus the old sign. Thatâ€™s enough energy to power roughly 55 Seattle homes. The Paramount Theatreâ€™s lighting upgrade and sign project also qualified the Seattle Theatre Group for approximately $56,000 in energy-efficiency rebates from Seattle City Light.

The Sign Factory is proud to have been a part of such an historically significant project. The Paramount Theatreâ€™s sign will continue to shine brightly and illuminate the Seattle skyline for another 80 years (or more).

I went to Paramount Theatre to see Rain: tribute to The Beatles.

What a beautiful theatre! I am so glad it is restored and being maintained.

I’ve added a photo, it’s the one with the ‘Miss Saigon’ banner on the side wall.

The Paramount is great! Not a bad seat in the house, great acoustics, and rich in design. Hope to hear the organ someday there.

Full Paramount history with photos in the 2012 link below.

I remember seeing a few films at this lovely elaborate theatre. Horror films mostly. Tales of Edger Allen Poe on a double bill with The Brain That Wouldn’t Die in the late 50’s or early 60’s is an example. Not impressive fair. The huge 1st run movies did not seem to play this palace very often it seems to me. I think it was used for Cinerama though for a short time. The big road show films played other palaces. They played the Blue Mouse, Music Box, 5th Avenue, Orpheum and Music Hall. Good the Paramount outlasted most of them. The interior is quite incredible.

Link with the Cinerama showings at the Paramount with photos. Nice embroidered bowling shirt at the bottom.