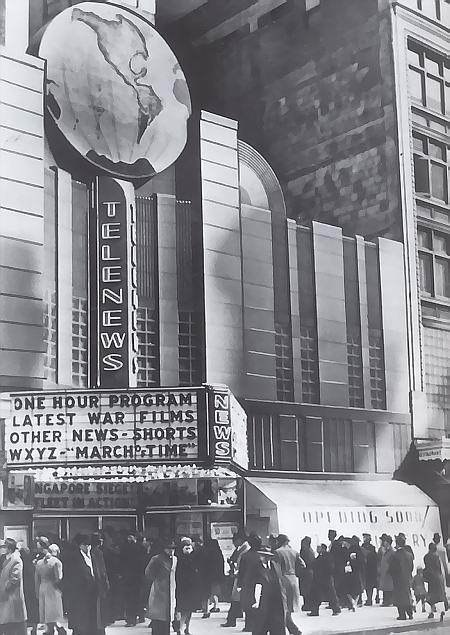 The Telenews Theater opened February 13, 1942 as a newsreel theater and could seat a little under 500. It was designed by Cyril E. Schley, who was a partner of C. Howard Crane, who designed most of the major movie houses in Detroit’s Grand Circus Park, the city’s downtown entertainment district.

Built in the Streamline style, the main feature of the Telenews was the large glass globe above the vertical marquee, which advertised the fact this was a newsreel cinema.

The facade was decorated in bright blue and orange terra cotta, separated by bands of glass block, which made for a bold and very modern looking building for the time.

In the basement, a radio station once broadcast behind large windows from behind which people could sit on benches and watch the news being read live. In the lobby, a teletype machine clicked away, giving patrons up to the minute news.

Among the March of Time headlines onscreen the theater’s opening day: ‘Singapore Under Siege’ and ‘Dorothy Lamour Sells War Bonds’.

By the 1960’s, people could turn on the news at home, and had no need for newsreels, and the Telenews Theater was closed.

In 1969 it was acquired by Nicholas George Theatres and substantially remodeled by Louis Wiltse. It was renamed the Plaza Theater, and seating was reduced to about 440. By 1971, it switched to adult fare, until closing in 1987.

Reopened in 1988 as the Tele-Arts Theater, it was now screening art and foreign features until it was shuttered in 1991.

The Tele-Arts Theater was rented to groups on occasion during the 1990’s, but began to decline. (Its spectacular globe and marquees long since removed.)

A good-intentioned attempt in the mid-1990’s to clean the terra-cotta facade resulted in its being somewhat damaged.

In 2000, the theater was converted into a nightclub called the Bleu Room Experience, which was open briefly, closed, and has since reopened.

Thanks for the kind words, stukgh! Something else the TeleArts had: dedicated and passionate customers. Just not enough of ‘em! —Carl

I was one of the projectionist at the Telenews when the ownership changed to Nicholas George Theaters. There was still crude editing equipment in a side room. Shortly after the Grorges’s took over the manager (who had been there for years) came into the booth with two scrap books filled with pictures of the theaters glory days during WWII. Due to my interest in motion picture history he wanted me to have them rather than the Georges. It was filled with stars visiting the theater. Some time later Sandy George asked me for the books back. I did keep many of the prime photos.
Years later AMC before it turned into (AlwaysMoreCommercials)was doing a special on Michigan movie making. That was the last see of them.But not all of them.
The George’s decided to refirbish the theater. One projector badly need parts, one side was always out of focus. The reply, the customers can’t see the projector!
Filmo4

I am very interested in learning as much as possible about the operation of the Telenews chain of theatres. To understand my interest, please read the comments below which I placed on a similar, but broader ‘message board’ for the Dallas Texas Historical Society. As you can see, my father was the manager of the Dallas Telenews during WWII. I would greatly apprecitate knowing your personal experiences being a part of the Telenews organization and what you might know about the day-to-day operation of the one-hour newsreels and other news providing aspects of the Telenews like the radio station that was in the original Detroit Telenews. From your comments you may only know this based on the scrapbook you mentioned and from talking with the long-time manager

Posted on the Dallas Historical Society Message board:

I have been searching for people who remember the Dallas Telenews, which was an all-newsreel theatre downtown that started in 1941 and was an important visual news source, especially during WWII before the era of television. My father was the first manager of the theatre. My son and daughter and I are trying to write a professional historical article on the Telenews- my son is an Assistant Professor of film studies at the University of Oregon and my daughter is an archival librarian at the University of Mississippi. We are especially interested in personal accounts of what it was like to attend the “all news” theatre. My family (grandfather) went to Dallas in the early 1920’s and this was one of my father’s first jobs. I (and my son and daughter) would very much appreciate learning anyone’s remembrances of attending the news shows at the Dallas Telenews.

Earlier another Dallasite, Jim Stinson, posted a message here that mentioned his going to the Telenews and being fascinated with the lobby teletype. When my dad passed away in 1984, we found the teletype tape from that machine from Dec 7, 1941. It contained the announcement that the Japanese had attacked Pearl Harbor- my father had only started as manager in November of 1941, just a few weeks before Pearl Harbor.

Here’s a whole page about Detroit’s Telenews Theatre, with pictures and text.

My father was the Theatre Manager for the Detroit Telenews in the mid to late 1950’s from the forties. I was with him on numerous times at the theatre in the fifties. Had many good times there!
TR Wheaton