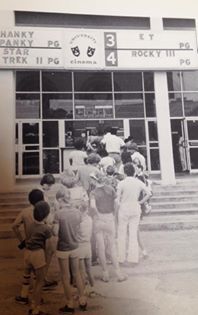 Was located a block north of the LSU campus in the University Shopping Center. The Jerry Lewis Twin Cinema was opened on November 4, 1970 with Lloyd Bridges in “Lost Flight” and Gene Wilder in “Quackser Fortune Has a Cousin in the Bronx”. It had a total seating capaity of 704 with the auditoriums seating 412 & 292. Two more screens were added and they opened on August 23, 1973 with the cinema being renamed University Cinema 4. It was taken over by Gulf States in 1980 and United Artists took over in 1986. It was closed in 1995.

The article ken mc linked to says the University Cinema had existed since 1960, but Boxoffice of February 16, 1970, says that a University Twin Theatre was to be built in the University Shopping Center at Highland Road and State Street in Baton Rouge. Presumably it opened later that year. I’ve been unable to find any references to any other theaters being in the neighborhood, so I think the University Cinema 4 must have been that 1970 project.

The house was built for Theo Cangelosi, who also had an interest in the Broadmoor Theatre in Baton Rouge, though he was not a theater operator (the Broadmoor was leased to Gordon-Perry Theatres.) The University Twin was designed by local architectural firm Wilson & Coleman, and had 704 seats, divided 412 and 292. Completion of the project was expected by July, 1970.

This theatre was opened as a Jerry Lewis Twin Cinema in 1970, which it remained until early ‘73 upon the addition of two more smaller cinemas. Upon this revamp, it was renamed the University Cinema. The theatre was one of the prime players in 1970s Baton Rouge cinema, often showing the biggest of the blockbusters, while catering to the arthouse crowd as well on occasion. United Artists took it over in 1980 and ran it with some success, converting to a bargain policy in the late 80s, which held until its closing in 1995. I currently work with the gentleman who ran it during its prime mid to late 70s years.

An article in the 8-23-95 Baton Rouge Advocate newspaper said the theatre “had closed” and plans were at the time, to demolish it for a hotel. UA was the last operator. UA officials and neighboring storekeepers were interviewed and didn’t have much good to say about the theatre or the ‘safety’ of the area. A restaurant manager said “when the theatre had to hire a cop…” he knew the end was near. The original operators were also quoted, and said the Lewis franchise fee was 8% of revenue. That figure squares with Lewis' written testimony to the US Senate in early 1970.

What company operated this before Gulf States?