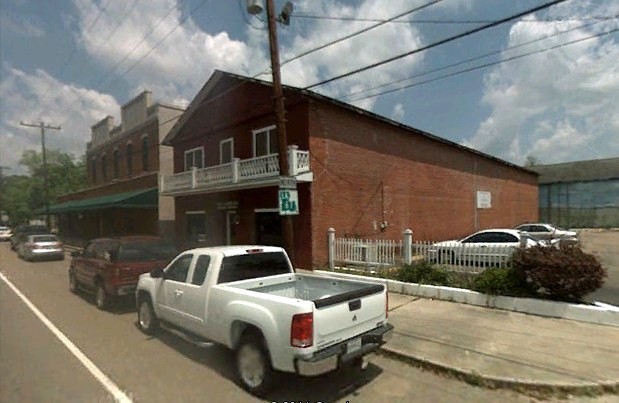 The Joy Theatre operated since at least 1941. It closed in the early 1960’s after the owner, Mr. Hodges, was murdered in it during a robbery.

It was idle until the early 1980’s, when it was converted to doctor’s offices, which it remains today.

My mother Geneva (Kitty) Perkins Logan and her brother Mayhan Perkins use to work at the theater. My grandmother owned the Perkins Grocery Store in Clinton. Jane Johnson

Clinton was used as a location for the 1958 movie “The Long Hot Summer” and the Joy Theater can be seen in the background in one of the early scenes around the town square.

Thanks David for that info.

Mr. Hodges was my grandfather. He died 3 months before I was born. I remember going to a movie at the theatre to see Elvis Presley. He died in the movie and as I was “in love” with him at that early age, I cried and cried. I was so upset my grandmother had them restart the movie so I could see that Elvis wasn’t really dead. I used to love going to that theatre. My grandmother was Grace Hodges and my grandfather was Russell Hodges. The murderer was never caught (Amazing when you think of how few people lived in the town at that time) and although the murderer killed my grandfather, he didn’t get the money. The story I was told was that he dropped the money box after shooting my grandfather and running and he didn’t stop to pick it all up after he dropped it. My grandmother was sitting in the vehicle beside my grandfather when he was shot. He had always told her if anyone ever tried to rob them, just give them the money, money could be replaced but lives couldn’t. Still to this day, I’d like some closure on this. Just hard to believe no one in that town knew anything and this murderer couldn’t be caught.