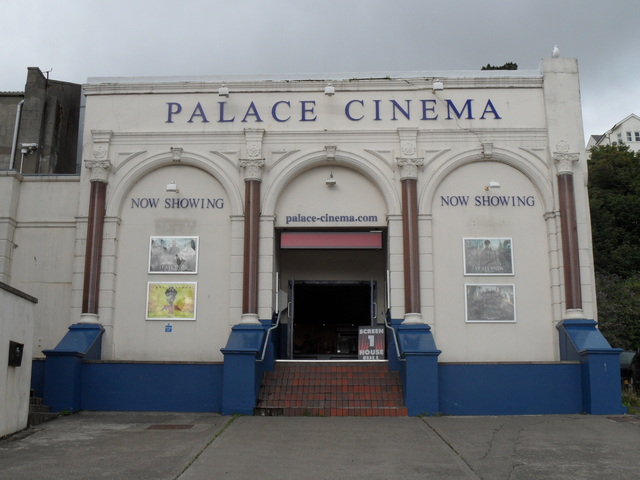 The building housing the Palace Cinema was originally part of the Coliseum entertainment complex, part of which was built in 1889 as the Palace Pavilion Ballroom and the Palace Opera House. Half the ballroom building was destroyed by fire in 1902 and it was re-built, with Baroque decorations, to hold a capacity of 6,000 dancers plus a seating capacity of 5,000.

It burnt down again in July 1920 and was re-built in a more modern style, re-opening on 18th July 1921. It was slightly larger than its predecessor, measuring 204 feet x 112 feet. Known as the White Palace, it was later re-named the Palace Lido and was demolished in 1994 to provide a car park for the Casino next door.

The second part of the Coliseum complex was the Palace Opera House, seating 1,800, it was used for high class variety entertainment. It had a large crush hall which also served the ballroom next door. Unlike the ballroom, the Palace Opera House escaped the fires. After closing in around 1913, it was later in use as a refreshment room (More about this part of the building later….)

The third part of the Coliseum complex was the building of a new theatre to replace the Palace Opera House. It was built on the opposite side of the ballroom to the old Palace Opera House and opened on 21st July 1913 as the Coliseum Theatre, with an appearance by famous music hall artiste Vesta Tilley. Seating was provided for 600 in the stalls, 2,000 in the pit stalls at the rear and 900 in the dress circle. It was demolished in 1965 and a Hilton Hotel was built on the site.

Back to the current Palace Cinema……It opened at Easter on May 13, 1988 and occupies the former stalls area of the Palace Opera House, which after its use as a refreshment room was gutted and Screen 1 seats 319. A second 120 seat screen is located in part of the former large crush hall. The remainder of the former crush hall now serves as the foyer.

The Palace Cinema is an independent cinema. It continues today as the only full time cinema in Douglas screening first-run release films. Seating capacities in 2021 are Screen 1: 293-seats & Screen 2: 95-seats.

Opening date 13 May 1988. According to the website Screen 1 is 293 seats and Screen 2 is 95. Plans for a third screen in 1998 never materialised. Subsidence temporarily closed the cinema in 2003 but everything hunky-dory now.