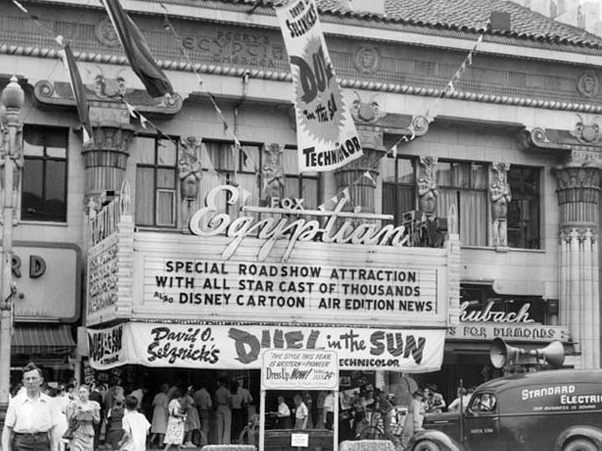 After fire ravaged the Arlington Hotel and other businesses on Ogden’s main boulevard in March 1923, Harman W. Peery & Louis H. Peery, sons of the deceased pioneer businessman David H. Peery, set out to replace the rubble with a movie palace that would be ‘The Showplace of the West’. Premier local architects Leslie S. Hodgson & Myrl A. McClenahan were commissioned to take on the design task. They visited the newest and trendiest West Coast theaters. Swayed by King Tut-mania of the time, and obviously influenced by Grauman’s Egyptian Theater (Hollywood, CA -1922), the duo soon had Peery’s Egytpian Theater down on blueprints. Construction began in the autumn of 1923 on ground where the Peery’s first Ogden house one stood.

Peery’s new 1,200-seat show-house was built entirely of poured, reinforced concrete. Prior to the theater’s opening, 70,000 pounds of gravel were piled atop the auditorium to test the buildings strength. Before and after measurements revealed a roof stress variance of just a fraction of an inch. Large lettering on the rear of the Egyptian Theater proclaimed it to be ‘Odgen’s Only Fireproof Theater…A Safe Place for the Kiddies’. While it was boasted that Egyptian designs and hieroglyphics were painstakingly researched, and accurately reproduced throughout, one can find examples in the lobby where impish 1920’s artisans inserted some not-so-authentic symbols. The story goes that these workers summoned Harman Peery to the lobby one day to reveal where they had placed his name ‘in Egyptian’ on a wall panel for all to see. He was depicted as a stick-figure of a drunk leaning on a lamppost. Mr. Peery bought into the joke. The bogus hieroglyphic remains to this day. In another lobby location, ‘fake’ figures proclaim the Peery’s built the theater with their check book.

Constructed in just 10 months, Peery’s Egyptian Theater was opened on July 3, 1924. The opening feature film was Zane Grey’s “Wanderers of the Wasteland”, photographed in what was claimed to be ‘Natural Colors’. Musical accompaniment for the silent film was performed on the Egyptian’s ‘Mighty Wurlitzer’ theatre pipe organ. The theater’s Egyptian-revival Atmospheric style auditorium makes Peery’s Egyptian Theater quite a rarity among theaters, where the projectionist magically turned a daytime sky ceiling to one at midnight, replete with twinkling stars. Seating is provided on a single steeply raked floor, providing excellent sightlines from anywhere in the house. Its ornate terra cotta façade, with original colors and details remaining today as bright and crisp as they were in 1924, and it is acclaimed for its intricate beauty.

Talking pictures came to the Egyptian Theater on April 27, 1929 with a showing of “In Old Arizona starring Richard Dix. With the introduction of sound movies, use of the Egyptian’s ‘Mighty Wurlitzer’ organ dwindled, primarily play during intermissions and occasional programs into the 1950’s. It was removed from the theater in 1960.

After Twentieth Century-Fox was incorporated in 1935, Perry’s two Ogden show houses - the Egyptian Theater and the Odgen Theater were leased by Fox Intermountain Theatres. Early on, the new operators replaced the Egyptian Theater’s original box office with a smaller, spartan structure and installed a drop ceiling in the outer lobby to accommodate a new marquee that quadrupled the size of the original marquee.

A major refurbishing took place in 1951 under the auspices of Fox. Although many of the interior colors were altered, the Egyptian theme prevailed, and in some ways the Egyptian Theater was more elegant than ever. “It Came From Outer Space” inaugurated 3-D movies at the show house on June 18, 1953. Just over three months later, October 28, the first CinemaScope motion picture “The Robe starring Richard Burton was introduced. To present the new wide-screen films, the inner-proscenium columns were removed to accommodate a picture more than twice as wide as it was tall. The new format came with a revolutionary four -channel stereophonic sound system. Audiences were both visually and audibly wowed.

A 1961 remodeling was not kind to the aesthetic sensibilities. Many of the 1924 interior designs and colors were painted over. A mammoth new screen was erected in front of the stage and proscenium opening, and the auditorium walls were painted pink to match the screen drapery. On a positive note, 1951 chairs were rebuilt for added comfort, and the auditorium floor was reconfigured to provide more patron leg room between rows, reducing the seating capacity to about 850. Under Fox Intermountain’s corporate successors - National Theatres, National-General Corporation, and finally Mann Theatres, the Egyptian Theatre remained a major first-run venue for two more decades.

But circumstances changed dramatically in the early-1980’s. Operated then by a small local company and reduced to second-run dollar movie venue, the Egyptian Theater was ordered closed by the county authorities late in 1984 for health code violations.

Boarded up for several years and threatened with destruction, the Weber County Heritage Foundation purchased the Egyptian Theater from its absentee owner literally at the final hour. Ironically, the purchase price was identical to what the theater cost to build the structure in 1924 - $250,000. The rescued building was turned over to the Egyptian Theater Foundation, who soon signed it over to Ogden City. It eventually came under Weber County operation. Conrad Schmitt Studios of New Berlin, WI was chosen to restore Peery’s Egyptian Theater. The revered firm has brought back original opulence to a vast number of theaters nationwide.

Detailed on-site investigation and laboratory analysis conducted by Conrad Schmitt led to the restoration of the original interior colors. Egyptian motifs and figures were reapplied, and gold leaf added glittering highlights. The tedious process assured that Peery’s Egyptian Theater was accurately restored - the only theater in Utah that can make that claim. The effort earned Peery’s Egyptian Theater an Honor Award from the National Trust for Historic Preservation, and two Merit Awards from the U.S. Institute for Theatre Technology. Through a complex partnership of Weber County, Ogden City, Weber State University, Egyptian Theater Foundation and Ogden/Weber Chamber of Commerce, not only was the Egyptian Theater saved and restored, but the adjoining David Eccles Conference Center was constructed, and a rebuilt former department store became the new Weber County government offices. Hundreds of monetary contributions, large and small, made the project possible. Major donations and grants came from the likes of the George S. and Delores Dore Eccles Foundation, Dr. Louis S. and Jan Peery, and the Utah State Legislature.

A superbly restored Peery’s Egyptian Theater reopened January 17, 1997 as a performing arts/motion picture theater. It is the only venue outside of Park City and Salt Lake City, and second largest, for the world-famous Sundance Film Festival occurring each January until ending in January 2006. In 2004 a Wurlitzer organ with 22 ranks was installed and in 2014 an extra 21 ranks were added.

I use to go to this theater a lot as a child in the late ‘70s, early '80s. I was at the very last movie played in the theater, and was glad when a lot of people fought the local government not let this building be torn down.

The Architecture Firm wasnâ€™t Hodgson and McClenahan, they didn’t start the firm until after the theater started construction. From 1900 to 1924 Leslie Hodgson was on his own. From 1925 to 1949 Hodgson and McClenahan was a firm together. The Architect was Leslie A. Hodgson with input from brothers Harman and Louis Peery. The contraction company was Whitmeyer & Sons at a cost of $200,000. Mr. Hodgson used them in most of the well-known buildings in Ogden.

According to an Egyptologist from Utah State University, most of the hieroglyphics that adorn the theaterâ€™s outer lobby are actual Egyptian characters, however some are unique to Peeryâ€™s Egyptian Theater. They reflect aspects of Harmon Peery and construction of the theater. During your next visit at the theater look for a pie, a book with a check mark over it, a man leaning against a light post and two men fighting

Some restoration information and photos are available at View link

This is Utah’s most fabulous theater left no holds barred! For film projection the booth is equipped with a German made Ernemann 16/35mm projector and Sony DFP-3000 digital sound processor. Stage speakers are JBL 4675 with JBL Dual 18" subs. The speakers are all on movable stands to aid in storage off stage during live shows. The screen is 50 feet wide.

My firm belief is that NO cinema or theater is complete without at least one set of working curtains. As my old boss in England told me when I was an apprentice projectionist… “Lad, it’s the magic of what is behind the curtains that keeps the audience in a state of excitement for the show to begin”. I also learned that the timing of the curtains closing on time was to never to reveal a blank screen! “Now that” he concluded “spells professionalism” and I’ve never forgotten my training.

RIGHT ON, Simon! I completely agree about curtains and NEVER showing a blank screen. During my childhood in the late 60s, through the 70s, and into the 80s, I don’t recall ever seeing a blank screen. It was in some homespun tiny art theatres in the 80s that I first came to walk into some little auditoriums with no curtains. But even then, there were soft lights on the screen—sometimes colored—aimed at the screen until the show started.

A correction and two updates to Peery’s Egyptian (Ogden UT) history, which I wrote:

First 3-D picture played at the Egyptian “JUNE 18, 1953. Just FOUR months later…” The Sundance Film Festival ended Peery’s Egyptian and Ogden UT as a venue 2016 In 2004 a replacement 22-voice Mighty Wurlitzer debuted at the Egyptian. In 2014 a major enhancement to the instrument added 21 voices for a total now of 43. —Van Summerill