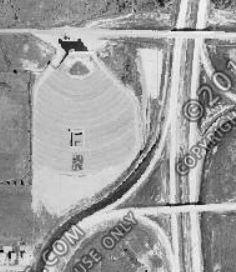 The Star Drive-In opened June 12, 1957, and was the subject of this single-page article in Boxoffice of May 5, 1958. It was the eighth drive-in for the Blatt Brothers circuit, a regional circuit operating in New York and Pennsylvania. Among its features was an outdoor dance floor.

Boxoffice gave the car capacity as 1,250. The projector required an enormous throw of 610 feet to reach the 152-foot wide screen, advertised by the theater as the world’s largest.

The Star Drive-in opened on October 25, 1947. The Boxoffice Magazine article mentioned in the post above was from a grand reopening, after operations were taken over by Blatt Brothers and they conducted extensive remodeling in 1957. The article was not very specific about those types of details.

This website contains details about the opening of the Star in 1947.

Thanks for the correction, NYozoner. Boxoffice did sometimes leave out important details. I think the layout editors, working under tight deadlines, sometimes clipped sections out of articles to make them fit the space available on the page. That still happens a lot with weekly and daily publications.

From the aerial images on the page you linked to, it looks as though Blatt Brothers expansion of the operation amounted to almost a complete rebuilding of the original theater.

It was most definitely an extensive rebuild, and more than a remodeling. The entire concession stand was demolished and relocated to the back of the lot, the original tower was rebuilt for Cinemascope, and a new ticket booth was built further back from the road.

An interesting fact about the Star, the manager mentioned in the article was Jake Stefanon, who left Blatt Brothers in the mid 1960s to purchase his own small-town drive-in near Perry, New York. The Silver Lake Twin Drive-In is still run by the Stefanon family, and has evolved into one of the finest drive-in operations in the country.

Rite Aid now stands where the drive-in was located.