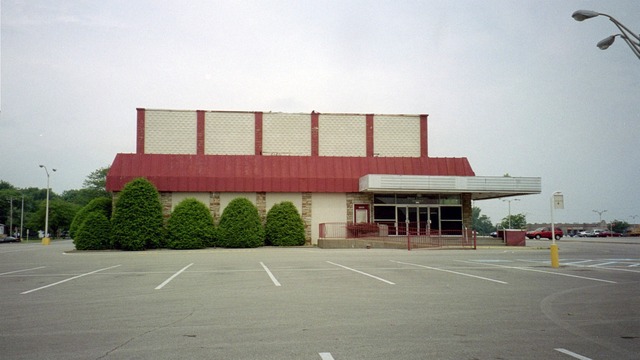 This former quad Cinemark theater at the Greentree Mall is being transformed into a "haunted house" with one of the four screens being turned into a room for rentals for school groups, banquets and receptions.

The venue, to be operated by Fright Night Productions as Psycho Mania: Theater of Terror, is expected to open around October of 2008. The ‘Psychomania’ was repeated in September/October 2009.

Yes, Trans-Lux did operate some Cinerama houses, but this was never one of them. This theater is too close to Louisville for Cinerama to have been exhibited there; Cinerama markets were well-defined and care was taken to never over-saturate a geographical area. In fact, according to this well-researched list of Cinerama theaters, the only Indiana city that had Cinerama showings was Indianapolis: View link

Eberson did build one purpose-built Cinerama house for Trans-Lux in Harrisburg. PA; the chain also took over the Martin Cinerama theaters in St. Louis and New Orleans.

I think its quite likely though that what was when this theater may have looked very much like other Eberson single-screen theater designs of the latter 1960s. Many of these had large, gently curved screens and many had 70mm equipment.

When the original theater was twinned, it apparently was called the Trans-Lux Blue and Gold. I have a hunch that when this twinning occurred, the original single auditorium was split in half, the original screen removed, and the projectors re-positioned to hit the new screens.

I would say that you are right about the screen and the projectors being changed. and yes the theater was split directly down the middle. and then after they decided to make it a four-plex they took part of that wall out of the front of the building built two to replace it and made a central hallway to get to the back two theaters. they built a second projection room to use for the back two theaters.

Does anyone have any pics of this building in its heyday, i would really love them if you do.

We have pulled up the ugly carpet in the lobby, sadly there is no trans lux emblem in the center of the chipped marble floor, but the floor is in great shape. we have rebuilt a wall in with three doors in place of the second set of doors that would have led into the lobby, of course it is not original but it is at least reminiscent of the past configuration. Oh good news when i turned on the water for the season there were no leaks…..lol which was always a problem in the past

copy and paste this for photos View link
This is our facebook page and we have photos on here and all the information on events and happenings at the building….
We had our first movie showing in seven years. Our screen is in the lobby and is 10 ft by 6 ½ ft. everything is decorated to resemble an abandoned theater from the 30s or 40s. we have painted and cleaned put up new lighting and did a faux finish on the walls. prior to the movies we showed a 12 min DVD of compiled Drive In Advertisements, and cartoons. To keep with tradition. Of course since we are in our lobby we are using temporary seating. Our chairs are white stack-able lawn chairs. Everyone seemed to enjoy them selves and we had a good turn out. These are semi public/semi private parties that are geared generally to our Facebook friends and their guests. There is a $5.00 Donation to cover cost and includes FREE Popcorn, and Soda.If you are interested please join our Facebook Page all of our information is put up on there usually daily

Here is my picture from November 2010.

Guys the building burned on febuary 28, 2012 at aboutt 6 am. I got a call from mall security and my step brother who is a 911 dispatcher. By the time I got there the building was belching black smoke. There were news crews and many onlookers. As the morning went on many of our friends,employees and close buisiness contactt stopped by to offer what they could. I did while the building was burning have the opertunity to stick my head in the door. The fire was mainly in the ceilling of the northwest theater. As i was looking the tiles were falling, setting our scenery on fire. Shortly after this point the crews were pulled from the back of the building. They now focused on the roof.“ Which now had a huge hole in it. ”. They also woorked from the lobby. The fire was spreading from back to front. And left to right. The theater next to what we called haunt 4 was half burned. The center wall which was addes when the building was twinned was burned through. It was constructed with double-ply drywall.. The center hallway was as the firemen put it a vortex of fire. As for our purpose for the building this hall was a. 22 person theater. This housed our preshow. The front two theaters were almost unharmed, except for the thousands of gallons of water that poured into the building. Near the back of the building the water was nearly 41/2 feet deep because of the slant of the floor. The water climbed the back steps and went out the back door. This was level with the parking lot. Aftr the fire was out" but still smoking" tbe city, mall, and fire dept. All turned their heads. We were inside the building gathering as much as we could salvage. Sometimes we were literally swimming in water full of charred wood, nails and broken glass. Need i mention this was febuary and we were in water we did not even feel the cold. I assume it was pure adriniline. We gathered stuff that we couldnt part with and some antiques such as a cast iron morgue table from the twenties. Yes it was extremely hard to get. As the sun went down that evening and we gathered all of the stuff we threw out the doors we packed everything into trucks a put the remains of 15 years into 1 storage unit. One week after the fire the building eventhough damaged survived tornadic winds.These were the same winds and storms that dropped an E.F.4 tornado acrost southern Indiana, most famously Henryville In. Other buildings 100 feet away had considerable sized chunks blown away. Our theater still stood a true testiment to its structure.It would be nearly 2 months before we were allowed back in to the building. Amazeingly after we signed the a safety release we were given unsupervised freedom to roam the building. We did just that. It had been our home for 5 years. We owes it to the building to give it one last tender look. While we gathered what we could on e again we shared tears and memories of the times we hd in the building. We took pictures and heartfelt memories with us that day. This building as much as the items we left in it was special in all of our hearts. As we locked the doors and turned over the keys there was a somber silence between my buisiness partner and I. It was a good run and we were glad to have been able to run it in the old GreenTree 4.we created another era of memories for the building. I am glad to say that in the four years that we were open we entertained over 70,000 guests. And many of them peed their pants. PSYCHOMANIA THEATER OF TERROR. GREENTREE 4. TRANS-LUX THEATER. ………..R.I.P…………..YOU SERVED YOUR COUMUNITY WELL.. THANK YOU

I apologize if this was long and rambling. I guess it was more of a vent for me. Tomorrow would have been our opening night. I am feeling somewhat hopelessly sentimental about the many memories shared by hundreds. Who entered the building. Also of my childhood and teen years that so much time was spent inside the building. I do miss it alot thank you for reading along memory lane with me. Matt Kemp

Ok im my sentimental rambling i did forget to say that. The building was demolished and is now a gravel lot surrounded by a fence. It is waitingto be paved. I cant tell you how many people are waiting for thatfence to come down so we can just hang out there agiain. I know it sounds silly bit it is true. Thank you for your time.

Status should needs to be changed to Closed/Demolished.