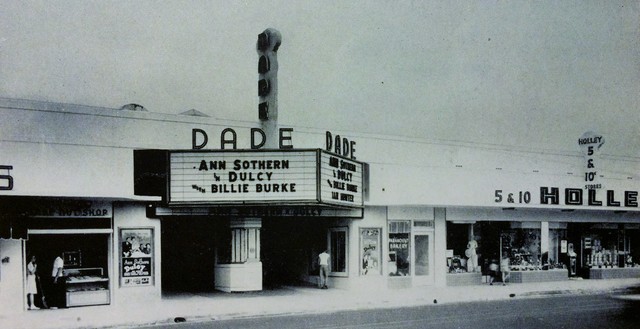 The Dade Theatre opened on November 28, 1940 with Gene Autry in “Melody Ranch”. It was operated by Paramount Pictures Inc. through their subsidiary S.A. Lynch. It was closed in 1954 and was demolished in 1955.

Contributed by Louis of Pompano Beach
Get Movie Tickets & Showtimes

Do you remember if the Strand had a stage?

I’m pretty sure it did. As I said, I won a Halloween costume contest there so we must have been up high enough for people to see us. But, since I was only six or so at the time, I could be mistaken.

Who was the architect and in what style was the Dade Theatre designed? When did it close and when was it demolished?

I haven’t been able to discover the architect of the Dade Theatre, but according to the January 3, 1941, issue of The Film Daily the contractors were the A. G. Witters Company. The Internet says there is still a Witters Construction Company operating in Hialeah, but I can’t find a web site for it. I don’t know if it’s the same company, but even if it is it seems unlikely they’d still have the records of a project built 75 years ago.

As for the style, from the one photo we have it appears to have been the basic Streamline Modern typical of most of the theaters built in 1940.

The Dade was in operation at least as late as 1954, when the October 2 issue of Boxoffice reported that it was getting a new manager, Allen Armstrong, formerly of the San Marco Theatre in Jacksonville. However, the house didn’t last much longer. The May 28, 1955, issue of Boxoffice reported that the Dade Theatre was being razed and would be replaced by a store and office building. The replacement building has apparently been demolished as well, and replaced by an apartment house called Friendship Tower.

Thanks for your search Joe! Sorry it took so long for my response.