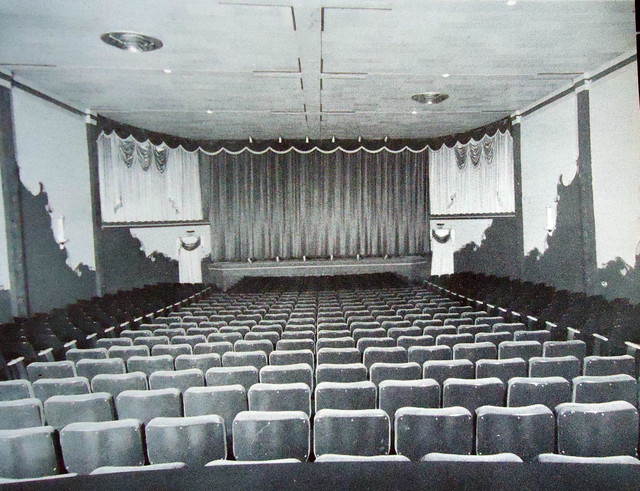 The Alex Theatre opened on July 28, 1950 with 550 seats, all on a single level. It is a plain red-brick Colonial style building with a plain marquee and red neon ‘Alex’ sign on the façade. It has always been an independently operated movie theatre. It closed in the 1980’s and was reopened in 1988.

The Alex Theatre still has its original ‘crying room’ in use at the rear of the orchestra seating area and it screens ‘family friendly’ movies. It was closed in September 2019. It was reopened in July 2020.

ALEXANDRIA — When Applewood movie theater in Anderson closed its doors for good recently, it was the end of paying $3 for your choice of second-run movies. It was not, however, the end of the $3 movie.

The Alex Theatre in Alexandria has been serving Madison County bargain-hunting movie-goers for the better part of 50 years with $3 ticket prices and a unique concession stand.

While the theater shows just one movie a week on its massive screen, the historic location is a big draw for area families looking for a cheap night out.

Elwood sisters Terina (Decker) Ball and Christy (Decker) Bashum bought the location in 2000 from Jim McClary. He’d owned the theater since 1988 and brought it back to life after it had been closed by its original owners, according to Ball.

The Alex Theatre was opened in 1950 by Rowell and Hope Weilert. Over the years, it was leased out to a handful of optimistic parties but soon closed down in the 1980s.

McClary saw potential in the red brick building and reopened the theater in 1988 with a classic red-carpet affair featuring the area’s most prominent residents. The first showing at the revamped theater was the animated Disney classic “Who Framed Roger Rabbit.”

The sisters have a collection of newspaper clippings detailing the theater’s fairy-tale opening. The historical evidence is kept in the theater to detail its evolution.

The Alex has been preserved over the years, reflecting its original 1950s style and size. Its only screen is wider and taller than any other screen in the area, according to the sisters. Bashum believes IMAX theaters are the only ones with screens bigger than the one at Alexandria.

More than 500 classic red velvet seats line up before the screen. They are the originals installed 50 years ago, Ball said. The chairs rock back and forth, as most did in those days.

The walls of the theater are detailed with romantic sloping drapes, heavy with time, and Renaissance-style painting. The thick, burgundy lines of paint arch and dive toward the back of the theater, making it seem more like an opera house than a small-town theater.

Just behind the 500-plus chairs, a small room speaks to a simpler time when common courtesy was highly regarded. The “Cry Room” is a secluded, sound-proof area where parents can take noisy children. The walls of the room are splashed with original 1950s cartoon characters, including Warner Bros.’ Sylvester the cat.

The room contains a large glass window through which the parents can view the movie while speakers pump its sounds into the small room. Ball says most old theaters still have the unique rooms but crowd them with storage rather than allowing the public to use the resource.

When McClary brought the theater back to life, he changed little about the place. He did, however, begin an unusual policy at the concession stand which remains today.

Instead of charging outrageous amounts for a bucket of popcorn like most theaters do today, the Alex allows its movie lovers to bring their own one-gallon containers for filling. It costs just $2 to fill the bucket and one free refill is included in the price.

The same policy applies for soft drinks. Customers may bring a 32-ounce cup into the theater to have it filled for $2. A drink of the same size typically costs at least $4 in run-of-the-mill movie theaters.

The sisters have dedicated the theater as a family venue and aim to show kid-friendly movies on a weekly basis. Last week, the movie version of the Dr. Seuss classic “Horton Hears a Who” premiered on the big screen.

While the Alex cannot offer multiple movie selections as Applewood Theater once did, the women believe the historic location provides a unique alternative to movie theaters that charge $8 per ticket and $6 per bucket of popcorn.

The Decker sisters have kept prices low over the years, offering candy for half the price of other theaters as well. The move is a risky one, since theater owners depend on concession sales to operate.

Because the film company’s take is based on a percentage, the sisters see no reason to raise ticket prices. If they did so, the film company would get more money and they would still see little profit.

This, Ball says, is why concession sales are crucial. Other than the two sisters, the theater employs only one full-time employee and a handful of part-time teenage workers. The operating cost of the ancient theater includes heating and cooling its decades-old walls and procuring movies each week. “We also have delivery and pick-up of films and buying posters,” Ball said.

As long as customers continue to frequent the concession stand, the sisters are confident that the location will remain open and prices will stay low. “We’ve tried desperately not to raise prices,” Ball said.

The key to keeping the theater from facing Applewood’s fate is at the concessions stand, Bashum said. “Buying them (concessions) from us is what’s going to keep us from doing that.”

It is a shame so many of the historic movie theatres like these try to keep their prices so non-competitive. The value of these great cinemas is their link to cinema history. Their “product” is their unique character; patrons should be seeking them out for the qualities of style and “personality” that they offer and which simply can’t be found at the gargantuan multiplexes with their vapid, cookie-cutter, assembly line rooms and massive concessions stands which scream out — all our resources went into selling junk food….the cinema rooms are just a second-thought.

Cinemas like these offer a quality of style and tradition that shouldn’t come at a discount. Discount pricing, I am afraid to say, often results in gems like these being forced to close, and like LouRugani said, theatres like these are a dying breed — and they shouldn’t be. They are a dying breed because for some reason patrons seem to buy tickets because they are discounted. A lover of historic movie theatres should be willing to pay at least as much for a ticket as it would cost to see that same movie at the multiplex. Hell, I would be willing to pay more. These classics offer an experience that is unique; IMAX charges EXTRA for the “IMAX Experience” and a real single screen gem like this offers its own unique experience. Patrons should at least be willing to pay going movie theatre prices to see a movie in such a marvelous cinema.

This idea that it is somehow a good thing to get to see a movie in a cinema gem such as this for $3 may seem wonderful for the consumer at first blush, but in fact, the theatre needing to offer its unique cinematic experience at bargain-basement prices in and of itself may eventually force it to close its doors. Haven’t we lost enough cinema treasures already? These owners shouldn’t need to give cheapen their unique experience just to stay afloat.

Living in the same county as the Alex, I wonder why a business model that has been working for decades needs changed.