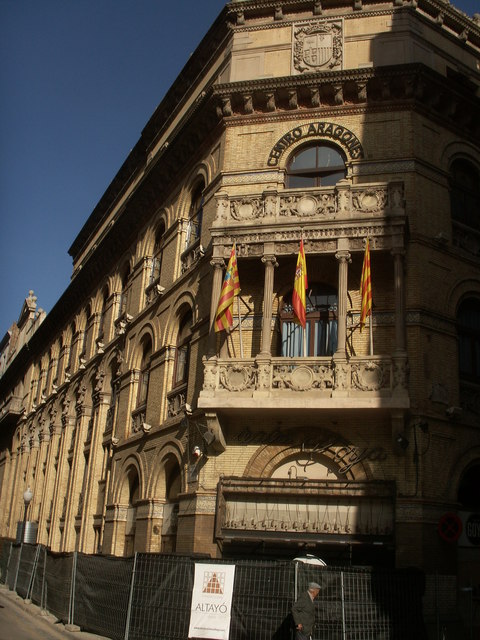 Located in the west of the city centre, just off the Ronda de Sant Antoni, close to Museum of Contemporary Art and the University. The Teatre Goya opened on 15th September 1916 with a comic-drama "La dicha ajena & Herida de muerte by d'Antonio Torner and Fernando Villalonga. It had a seating capacity of 1,010 in orchestra and two balconies, which extended to the proscenium. In June 1918 it was screening documentary films of the war.

In September 1922 films became a regular feature of the programming, but it wasn’t until 7th October 1932 that it converted to a full time cinema, known as the Cine Goya.

It closed on 31st August 1986 with "Jaws" and "The American Dream". From 21st October 1986 it returned to live theatre use, again re-named Teatre Goya and with a reduced seating capacity of 716. Closed sometime after 1995, when seen in April 2008 the building was undergoing a renovation/restoration, to re-open as a theatre. Unfortunately, the original interior has been stripped out, but it is not known what the new interior will look like.

The Teatre Goya re-opened as a live theatre in November 2008.

It would be interesting to know if the Goya name is a tribute to Francesco Goya, the famed Spanish painter and printmaker. He’s best known for his paintings “The Massacre of the Innocents,” and the nightmarish “Saturn Devouring His Children,” a painting which I first saw in an art book when about 7. It so frightened me that I memorized what was on the pages immediately before and after, so I would not accidently turn to the image. Goya’s series of etchings, “The Caprices” are also famous. Some are as, or nearly, disturbing as “Saturn.” Any information as to whether the theatre/cinema was named after this artist would be appreciated.