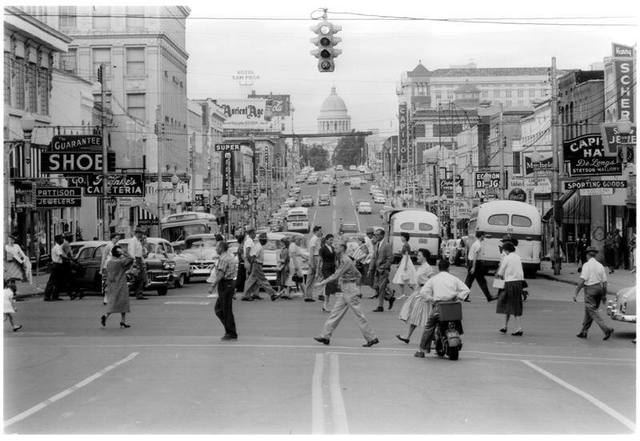 The Capitol Theater was opened March 13, 1921 with Cecil B DeMille’s “Forbidden Fruit”. By the early-1940’s it was operated by Paramount Pictures Inc. through their subsidiary Ed Rowley. It was still operating as a movie theatre in the 1950’s.

The Capitol Theater was not on Main St, but on Capitol St. Look at the picture above. The theater is on the right and the Arkansas State Capitol is in the distance at the end of Capitol St. Robert H. Gibbons

Sad only this much is written.

Looks like the Capitol had 2 organs during the 1920’s. Lostmemory mentions Wurlitzer opus 371 installed in 1920. In 1926 Wurlitzer installed their opus 1330, a style E X, (2 manuals 7 ranks in 2 chambers). I’ve noticed a couple of other examples of theatres which replaced their organs within just a few years. Of course, being played 8 to 12 hours a day, 7 days a week would wear out the leathers in the organ pretty quickly.

I worked at the Capitol Theater (Capitol & Spring) from 1965-66. We ran 1st run movies like Sound of Music and Dr.Zchivago. The theater originally showcased plays and radio broadcasts. It was converted to show movies in the 1940’s. There were props stored back stage and above the UA offices from years gone by. There were also binders of newspaper ads from shows that dated all the way back to the 20’s. I hope some of the history was saved before they tore it down.

Hi, Will and folks! As a 50-year LR resident now living in East Tenn., I wanted to add there was a THIRD Capital Theatre, spelled with an A, which you’ll find in local annals. Predates me by decades, but I know it stood on West Markham near the Old State House and west of the late, lamented Hotel Marion. Probably east of Broadway and the Courthouse. THAT Capital was more a vaudeville house. Hosted Greats of that age, including Sarah Bernhardt. You’re correct that the NEXT Capitol was at 600 Main — opened 1920s with 1,261 seats — and lasted until the 1950s. That LAST Capitol we recall stood at 324 West Capitol (and Spring St.)and earlier had been the “Pulaski.” Was a first-run house for the old Ark. Amusement Co. in the Arkansas Theatre (516 Louisiana) headed, I think, by a Mr. Robin Wightman. City had a HOST of theatres, 1950s: The Main, New, Roxy, Crescent, Rex, Prospect in Hillcrest, Lux, the Lee and Heights and Nabor, not to mention drive-ins and NLR. Golden Age of movies!