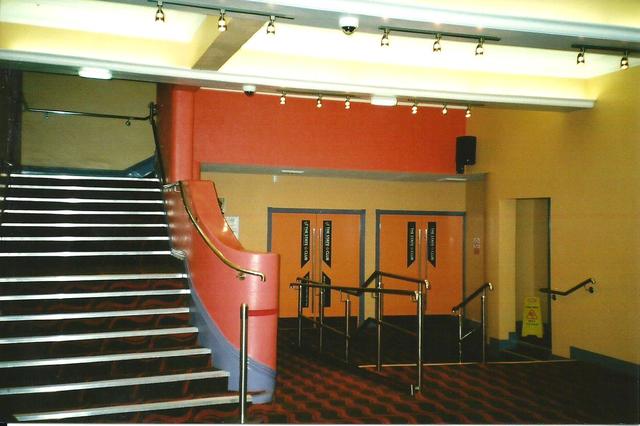 Construction on the new State Cinema was already well advanced when World War II broke out in September 1939, and the building was allowed to be completed, opening on 17th June 1940 with Marlene Dietrich in "Destry Rides Again. It was the last new cinema to be designed by Nottingham based architect Alfred John Thraves. It was an independent cinema and had a seating capacity of 1,040 in stalls and balcony levels. There was a stage, upon which live variety shows were occasionally held and also there was a popular café attached.

In June 1941 a Lafleur (Hammond) electric organ was installed for a period of time.

There was talk of re-modelling the cinema in 1972, but these plans came to nothing and the State Cinema was closed in 1973.

I am not sure what use the building had over the next 30+ years, but it was renovated and re-opened as the State Club on 29th November 2007. On 29th February 2008 a 10 metre retractable screen was added for cinema use and the opening film was again "Destry Rides Again" which originally opened the cinema in 1940. The latest first run films are now screened in the early-evenings and are projected digitally. Classic films are screened in the afternoons. There are 180 VIP seats in the former balcony and 160 seats in the former rear stalls area beneath the balcony. After the evening film show finishes, the building becomes a nightclub and live performance venue, which has a capacity of 600, using the dancefloor space in the former front stalls area. There are licenced bars available and open for both the cinema and nightclub use. The State Club had closed by 2017.

A couple of minor amendments – the cinema reopened on the 29th February 2008, and the Club on 29th November 2007. Seating is in individual armchairs in the front stalls area. The cinema seems to have been owned throughout it’s first life by Star Cinemas (Gainsborough) Limited. Some photographs taken in December 2008 here:–

On a visit in 2017 the State seemed to have closed – however some major repair work to the auditorium walls seems to have taken place since 2008.