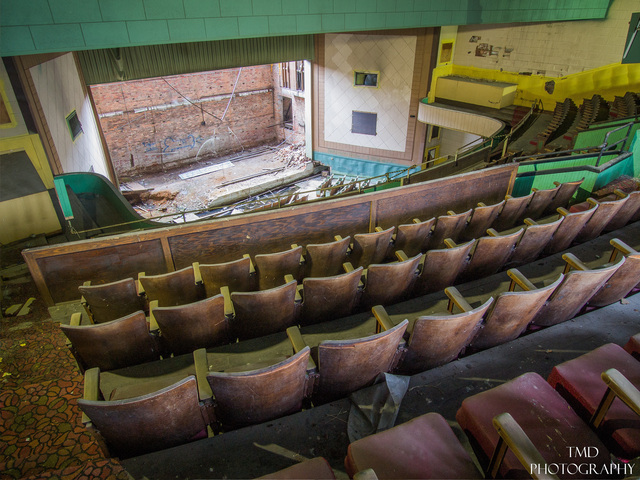 The 400-seat Peoples Theatre was opened in 1911. It was enlarged by 1932 to increase the seating capacity to 1,000-seats. It was closed in the early-1970s and the building sits vacant and deteriorating.

This theater has been closed for years. I do know that over two years ago it had supposedly been “saved”, according to the town’s newspaper. I went through the archives on their website and came up with this:

If you’ve read the article by the time you get to this, I’ll give you my own opinion: Summer of ‘08 had passed and the theater looks exactly as it did two years ago. Frankly, I don’t think it sounds promising if they’re having to pump water out of the orchestra pit. The People’s Theater is merely a thing of the past.

The Peoples Theatre closed in the late 1980’s when it was under the Carmike Cinemas chain. The only operating moviehouse in Roanoke Rapids is the Cinema 1 & 2 which was once under Carmike’s operations,but it is now run by an independent chain.

Nearby is a much more attractive theater building being used for some retail/and or office application.A handsome brick structure with some interesting statuary.

I was in RR yesterday (waste of time).The theater I refered to above is at 1012 Roanoke St.The carvings are lovely,for this town.The theater has a large stage box,the building has retail in front.Next time I’ll have to get out and go in,try to see what is left inside,theater-wise.It was a grand place at one time for sure.

The huge,ugly,abandoned theater in nearby Weldon is now being used as a church.

The Peoples Theater is located on the 200 block, east side, of Roanoke Avenue near the intersection of 2nd Street. It is the third storefront from the corner (the pink Art Deco building). It definitely appears to be in bad shape; i’m surprised it hasn’t been demolished yet.

My husband & I went to see the Buddy Holly story there during the late 1970s. I remember thinking that the theater would be wonderful to restore.

This is a very poor listing. We need to add some information.

The theater was already in operation by April 1915, when it appears on the Sanborn map. I’m not sure how much earlier it opened. The building originally had a facade matching the portion to the right of the ‘new’ entrance. The original central entrance was a long, narrow hallway between two storefronts, and was located where the abandoned jewelry store with the purple vitrolite is shown on streetview.

The original number was 47-49, but this had changed to the current address by 1919. When the theater was remodeled at some later date, the entrance was moved to the northern storefront, and the auditorium was changed to a transverse format. In the process, this seems to have eaten into the rear portion of the small storefronts facing 2nd St. The result was an almost entirely new theater.

The marquee was removed sometime before 2018, and the building remains in a derelict state.

According to the NRHP listing for Roanoke Rapids: The theater was built in 1911 by the Robinson brothers. The auditorium was expanded and modified sometime between 1919 and 1925. The present entry dates to the ‘50s, and the theater operated until the early ‘70s.

I have added a Sanborn view showing the original configuration.