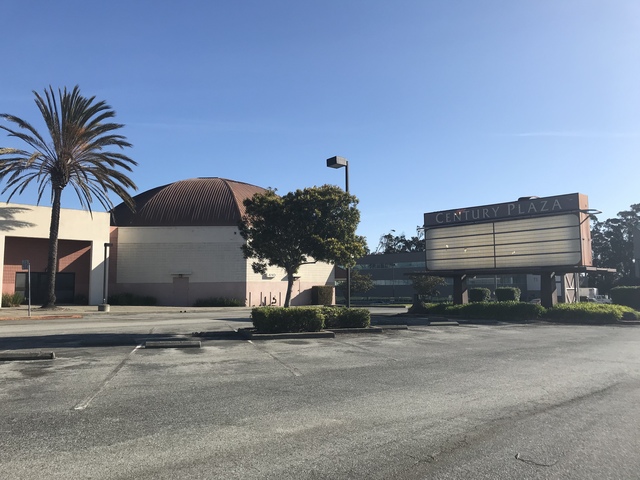 In the early-2000’s, as newer more modern megaplexes with 20 or more screens began showing up, the Century Plaza began to fade from the limelight as interest shifted to the newer theaters. The Cenury Plaza showed it’s last movie on April 17, 2008 as on April 18 the new Cinemark Century 20 opened two blocks away. It became a bowling alley and was demolished in late-2021.

If this complex was built by the Syufy brothers Century chain, then the architect was certainly Vincent G. Raney, who designed all the theatres built by Century from 1964 into the early 1990s.

I recall seeing a news story on Channel 7 about 3 years ago about a rat infestation at this theater & it caused patrons to flee during movie showings.

Except the 20-plex is a Century Theatre. Not exactly ironic.

Looks like it was turned into a bowling alley.

Way cool. I bet a bowling alley under the domes will be pretty fun.

I miss this place so much I would come here all the time as a kid. I made a lot of great memories here. All the movies I watched here this place was just magic to me. Now it just sits there deserted like the magic stopped. I always make a stop here and walk around the building admiring it. I miss it dearly. I wish they would of never closed. I wonder what’s inside I hope they never take this old theatre down I consider this history and hope it opens up again :)

In a previous comment, somebody wondered what was still inside the closed Century Plaza 10.

In June of 2012, I got a ‘tour’ of the closed theater by the guy who was thinking of turning it into a Bowling Alley and “Entertainment Center”.

He was also considering keeping at least one of the auditoriums for private movie shows for birthday parties, etc.

At that time, on the main floor of the building, most of the interior non-load bearing walls had been demolished or torn down to the steel framework. Nothing remained of the former lobby or concession area. All carpeting and ceiling tiles were gone. There was no electricity in this part of the building, except for strings of bare work lights. Water was turned off except for one, still functioning restroom.

All the auditoriums except for two of the smaller ones had been completely or partly demolished or trashed. There were no seats, although a couple of the auditoriums had piles of seats stacked in the back, and I think I recall the owner telling me he was going to sell them.

Holes had been cut in the screens to remove the speaker systems behind them, and it was obvious that the surround speakers had simply been ripped down from the side walls.

The mezzanine area,where the projection rooms were, was still pretty intact, and had some limited AC power still working. The projection equipment (35mm)and sound equipment had all been ripped out, except for one projection room which served the two surviving auditoriums. I understand one of the demolished auditoriums once had a 70mm projector, but it was long gone in 2012.

I had brought a big ‘platter-reel’ of film with me that day to test the remaining projection equipment, and after I gave the system a check up, we ran a bit of film to evaluate if the remaining equipment was still usable.

The theater never had any digital cinema projectors, which I advised the owner they would almost certainly need to consider installing as film was rapidly being phased out in 2012.

I’m not sure what happened after that. As far as I know, the bowling alley/entertainment complex idea fell through, or at least was on indefinite hold.

Last time I went by there, over a year ago (in 2017) the the building was still there, but looked abandoned.

I am posting a few pictures I took during the 2012 visit.

Walked past yesterday (3/17/19) and it’s still abandoned, nothing going on. Signs on the doors warning not to enter because of black mold. The outside still looks remarkably preserved, though.

Went yesterday to take pictures, and it’s been demolished. Green construction fence around it. The main sign is still standing. No idea what’s going in.