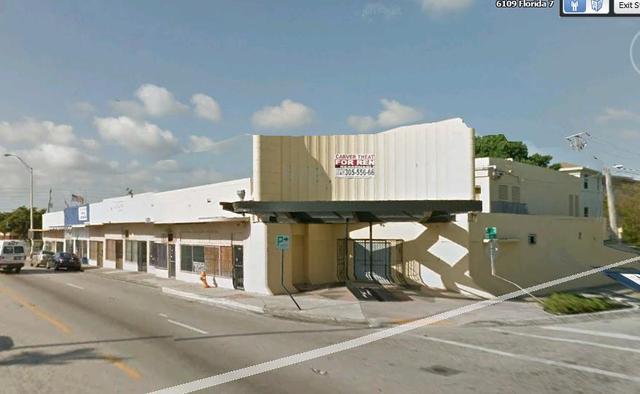 This early Wometco Theatres house opened as the Center Theatre on March 9, 1940 with Mae West & W.C. Fields in “My Little Chickadee”. It offered free parking. It was playing sub-run double features by the mid-1950’s.

In later years it was known as the Carver Theater, and after closing in 1968 it became an African-American church. It is standing empty in 2009. In May 2018 the City of Miami purchased the theatre and are planning a renovation.

The Center Theatre was under construction and expected to open in March, according to the January 6, 1940, issue of Boxoffice. The architect was Robert E. Collins.

As a child growing up in South Florida during the 1950s, I frequented The Center Theater. It was right around the corner from where my grandparents lived. On weekends, when weâ€™d go over to see them in the morning, by the afternoon, we might managed to go over to The Center and see a movie. Usually, most of the films were B-Movies. The bulk of films shown were low budget. Occasionally, a major film only made it to the theater out on general release. On Saturday mornings, the theater offered the usual â€œKiddies Matineeâ€ that consisted mostly of Looney tunes and then some old comedy film, like â€œAbbott & Costelloâ€ or a â€œThree Stoogesâ€ marathon. My older cousins always went to The Center to see the horror and Sci-Fi films. The three most popular ever shown at the theater over an extended period of repeated showings were â€œThe Blob,â€ â€œHouse on Haunted Hillâ€ and the most popular repeat of them all, â€œAttack of The 50 Foot Woman.â€ If anything might be said about the old Center Theater was that it introduced me to some of the best in what is now considered cult films. Some of which scared the heck out of me. One Iâ€™ll always remember going to see with my cousins was â€œThe Return of Dracula.â€ What got me so hyped up was all the screaming and excitement created by the audience. I was only seven years old at the time and I guess at that age youâ€™re very impressionable. Perhaps the strangest of all things to remember about the little Center Theater was that the building was painted a stark bright pink!

There were also a series of major films, out on general release that I would see a second time at The Center Theater. Most notable was the Bob Hope comedy â€œThat Certain Feeling,â€ that I had previously seen at The Miami Theater on Flagler street in widescreen. Then, another I remember well was the historic drama, â€œFar Horizons.â€ But, perhaps my fondest of all memories of going to see movies at The Center was when there was a tremendous â€œdouble billâ€ of the two big war films, â€œRun Silent, Run Deepâ€ and â€œThe Enemy Below.â€ This was the first time I ever saw the theater packed to the hilt. Then, adding even more intrigue to the situation was when the two films were over, we got outside to see a line of new patrons already formed all the way around the building, standing out there in the heat waiting to see the next showing! The theater manager had to ask people to please leave and not sit through a second showing. After all these years, Iâ€™ve come to understand that what made the little theater so special was that it was the only one severing the community of â€œEdisonâ€ and the vicinity of where â€œShellâ€™s Super Storeâ€ was located on 7th Avenue. After a movie, we would then walk several blocks down to a â€œDairy Queenâ€ and have some ice cream. Aside from the little Center Theater, I managed over the years to experience just about every indoor theater of Dade County, including the lavish theaters of Miami Beach and every single drive in theater! Itâ€™s an accomplishment Iâ€™m very proud of having done during the time of my growing up in South Florida! Of course, in those days there was a magic to going to the movies. Not like today, where you just show up and pretty much can predict whatâ€™s going to happen.

According to Street View on googlemaps.com, the Center Theatre
building is still there. It appears to have been an African-American church at one time, now vacant.

Closed in 1968 as the Carver. The building is still there.

Sadly, If you have “very little on “blacks only”, yiddish and spaces by the indigenous tribes” you have very little that is not already in public domain.

Nothing sad about it Al. Your guesstimate of what I am including and not including is not true. I am trying cast as full a net as I can. Statistically there’s less documentation on these spacees and of coverage and info on BLACKS ONLY cinemas was less than adequate. Read your notes. You aren’t very friendly.

I am not sure what you are upset about. We seem to agree that documentation on these cinemas is possibly gone forever. I think that is sad.