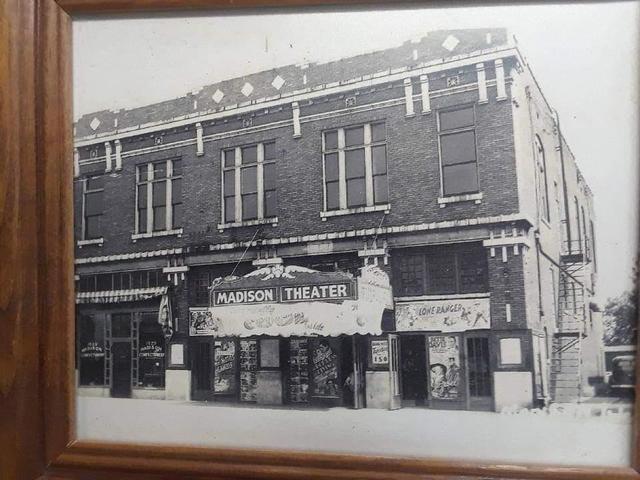 In 1950, the Madison Theatre was owned by the local volunteer fire department and operated under lease by Mrs. Regina Steinberg. That year, the February 25 issue of Boxoffice reported plans to enlarge and remodel the theater, with plans by architect/engineer Samuel Sanner. A May 13, 1951, Boxoffice item said that the Steinberg family had been operating the Madison for 21 years.

The enlargement of the house is not mentioned in the February 17, 1951, Boxoffice item about the reopening, which was to take place on the 14th. But one Boxoffice item about the project said that the building was to be extended to reach the alley behind it, and a 1971 view of the area at Historic Aerials shows one building on that section of 3rd Street that reaches the alley, and the rear portion has a different colored roof than the front portion. It that was the theater, then the expansion must have happened.

The renovation was extensive, in any case, and included building a new floor, reconditioning the seats, complete redecoration, and other improvements. The house was closed from January 6 until February 14.

An April 23, 1955, Boxoffice item said that Mrs. Steinberg had sold the Madison. After that I can’t find it mentioned in Boxoffice, but there are probably a dozen American towns called Madison, and all of them seem to have a namesake theater, so it might be hiding in there somewhere.

The Midwest edition of Boxoffice of 10/24/60 had the item that “the Madison Theatre is being closed and dismantled. All the fixtures will be sold.”

There is a vacant lot where this building once stood.