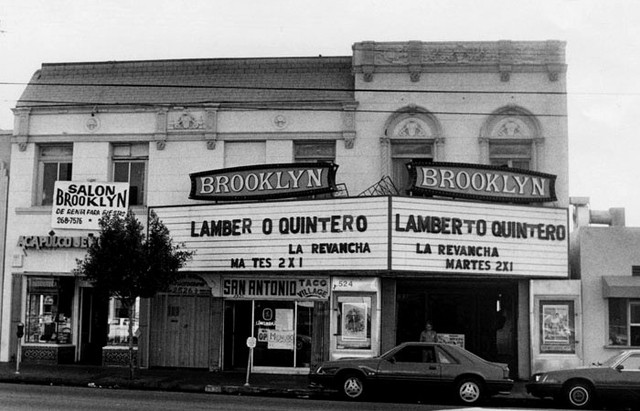 The Lido Theatre was a neighborhood movie house in Los Angeles designed by architect L.A. Smith and opened in 1925. It was later renamed Brooklyn Theatre for the street it was located on (Brooklyn Avenue, now called East Cesar E. Chavez Avenue). By 1957 it was operated by Aladdin Enterprises. It was closed in 1989 and has since been demolished.

No, a subway station has not been built yet. MTA uses the site for several vehicles though. The subway is being built south of this location on 1st Street.

Glib Chandrowsky, the basso profundo who attracted notice in the role of the High Priest at Graumanâ€™s Chinese Theater during the showing of â€œThe King of Kingsâ€, will make his first personal appearance since his engagement in the Grauman prologue at the Brooklyn Theater, 2524 Brooklyn Avenue, Sunday Monday and Tuesday. Chandrowsky was the outstanding soloist with the Ukranian Choir which appeared throughout the country.

The Brooklyn was well inside the city limits of Los Angeles, not in East Los Angeles. Here’s a 1987 photo from the LAPL.

HELLO!
I went through my old photos, and found a COLOR snapshot of the old BROOKLYN THEATER, that I took in MAY, 1980.

I will post it on this site, just as soon as I figure out how!

It’s a close-up of the right (west) half of the building.

The stucco was beige, with a reddish-clay-tile mansard fascia, and ornate terra-cotta capital trim, at the front of the roof.

The “BROOKLYN” sign atop the marquee had white lettering on a faded red backgound.

And, there was a white FORD F-150 Pick-up
parked in front… with no license plates!

ONE FINAL NOTE:
While it was open and operational, the theater was ALWAYS on “Brooklyn Avenue”. The theater reportedly closed in 1989.

The street was not re-named East CESAR E. CHAVEZ Avenue
until after Mr. Chavez’s death in 1993, in his honor.

An earlier poster mentioned the Variety’s Boys Club Christmas parties that were held at the Brooklyn Theater back in the day. I went to a couple of them as a member of the club as a 5th and 6th grader in the early 60’s.

They had a crying room for mom’s with babies in which alot of us 8/9/10 year olds would sneak into to get a new perspective on the movies that we had been watching all day.

The Brooklyn was more of place to meet the girls from our school (Sheridan Elementary School) down the street. For most of us it was where we experienced our first kiss and “made out” as much as we were able to. The ushers tried to control the pre-adolescent crowd by blinding us with their flashlights. We just moved to another location where they couldn’t see us.

Wednesdays or Thursdays were when families attended being drawn in with a 2 for 1 admission.We would walk to the Brooklyn from our converted garage on Mott street about 5 blocks away. That place is still there.

Notable movies that we saw there on Saturdays were “The Hustler”, “Days of Wine and Roses”, “Psycho” and alot of “Three Stooges” shorts. They generally had a more mature marquee where kids like me learned to appreciate good acting and great films. I think this was before they tried to address the changing demographics in the area. There were still many lingering Jewish families in the area and they would just have special nights a couple times a month to show Mexican cinema.

The Brooklyn Theater was definitely a neighborhood institution.

The Mighty WurliTizer Theater Pipe Organ, Opus 1092, was shipped to this theater from the WurliTizer Factory in North Tonawanda, New York on June 26, 1925. It was a 2/4 (Manuals/Ranks, Keyboards/Sets of Pipes) with a curved console. It had a total of 292 pipes, cathedral chimes, xylophone, glockenspiel, bass drum, kettle drum, cymbal, snare drum, tambourine, castanets, Chinese block, horse hoofs, surf, bird, train, auto horn, fire gong, steamboat whistle, siren, tom tom and door bell. These sound effects were real not some electronic gizmos! Does anyone know how long the organ was in the theater and what happened to it?

“Gee Dad, it was a WurliTizer!

This theater appears in the movie Falling Down, starring Michael Douglas, filmed in 1992. His character is the target of a drive-by shooting while standing at a pay phone on the sidewalk in front of the former theater.