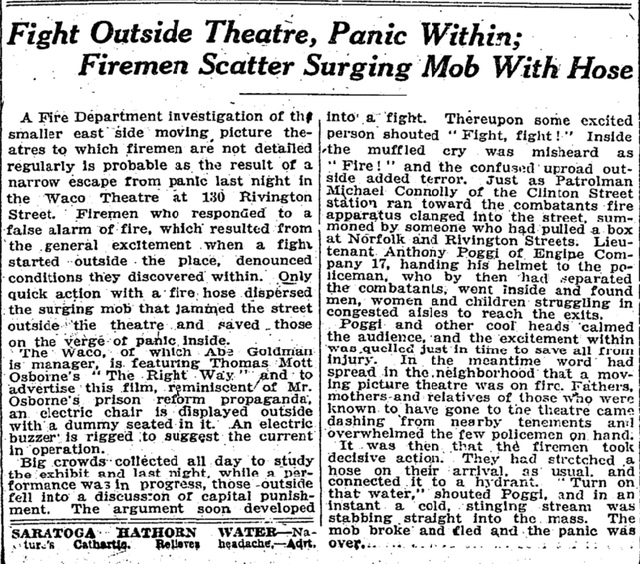 Apparently located across from the Golden Rule Theatre, the Waco Theatre showed films from 1908 through at least 1927.

Contributed by A
Get Movie Tickets & Showtimes

The Waco Theater opened in May 1908 by the World Amusement Company (hence it’s name). It was a 300-seat storefront nickelodeon. In the mid 1910s the M & S circuit acquired the Waco and remodeled it into a 600-seat house.

In 1909, the New York Sun reported about the following about moviegoing in this section of Rivington Street:

At one point of Rivington Street, three brightly lighted fronts blink at each other at such close quarters that it seems as if the spectator could not be quite sure exactly which house he was getting into; but the neighboring six square blocks with their 50,000 population keeps the managers far from starving. One of these, who smiles out of the box office window at 118 Rivington [the WACO Theater], says that his patronage is entirely local, confined almost within two or three blocks. â€œWe play to our trade,â€ he says. â€œYou will find it the same way all over town. We have here the same people day after day, and we find out what they want and give it to them.â€ The most elaborately produced Shakespearean plays donâ€™t appeal much to them; they donâ€™t understand them. Neither does the broad comedy that they like over in Fourteenth Street. What our patrons like most is sentiment and emotionalism that appeals to their better nature. Grown men come in here and watch some play with tears running down their faces.â€

Thanks for the wonderful insight into the neighborhood, Judith!

I would imagine the Golden Rule was one of the blinking fronts but the Ruby was not yet open in 1908. Any ideas on what the third house may have been?

The third was the Essex Street Theater at 133 Essex, which is listed under Palace Theater (133-135 Essex). There was also a nickel-and-dime theater at 159 Rivington Street, a former Yiddish music hall.

In 1910 a fourth movie house opened its doors at the corner of Essex and Rivington streets: the 276-seat Metropolitan Theater at 134 Essex Street. The place had a bad start — the floor crashed on the opening day — but it survived well into the 1910s.

Adjusted the street view to point at the current 118 Rivington Street, which is a bar called The Magician. It is the second storefront from the corner – in brick with red trim around the recessed entrance. NYC Dept of Building records indicate this structure was erected as a new building, with a completion date of April 16, 1940.

For what it’s worth, the NY Times has an article about an incident that took place outside the Waco Theatre on January 8, 1922. The article itself appeared the following day, Jan. 9, 1922, on the front page of the Times. It mentions that the address of the Waco was at 130 Rivington St.