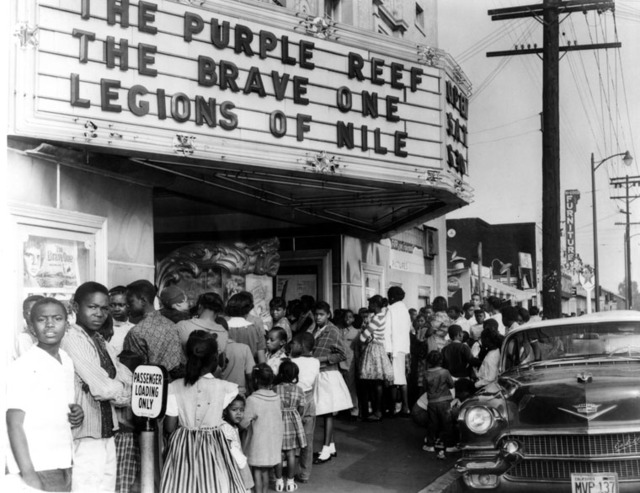 This theatre is located in the Watts neighborhood in the south of Los Angeles. It had opened by 1939 and was an African-American theatre. By 1957 it was operated by Aladdin Enterprises.

Here is a picture, courtesy of the LA Library:

There is a park and community center at this location now.

According to an article in the September 11, 2008 Los Angeles Times, Barbara Stanton is spearheading a drive to bring a movie complex to Watts. She has in mind a four-screen, 1000 seat auditorium on a 1.2 scre site near 103rd St. The 20-million project is called Wattstar Cinema and Education Center. By the way, this new project is unrelated to the Largo which is long gone.

I grew up in Watts. The Largo was the theatre I could walk to. I can rember seeing the movie Shane. It was at that date in time 6th grade and going to 102nd Street school that I said to myself that if I ever had a son I would name him Shane. I couldn’t wait to repeat the line come back Shane. Well I did have a son and I did name him Shane and I have repeated that line many many times. Thanks for the picture it took me to another place in that that I will never forget. Thanks for the memories. I am now a Senior Citizen so it’s been a long long time ago. Also at that time there was another movie theatre in the area called the Linda theatre.

thanks LaJane for a great Story.I named my son SEAN because I love 007 movies.Wanted to name the second son Clint,but my wife wouldn’t stand for that so we settled on KYLE,Clint Eastwood’s son’s name,funny how Movies reflect all our lives.

In 1963 I came to LA as a young man from The Netherlands to study at the UCLA. I’m 75 now and still remember the good times I had as a jazz lover in LA (The Lighthouse). One evening I was taken to Watts by friends to attend an after hours concert by Art Blakey & the Jazz Messengers. They had first been performing at a big stage in LA at prime time and afterwards came down to this movie theater in Watts to play for a great jazz loving crowd. It was a free concert if my memory serves me well. Does anybody remember this and know which theater this was? Is there more to learn about this subject of the local jazz culture? Where there other jazz musicians playing after hours in (movie) theaters for a special audience?